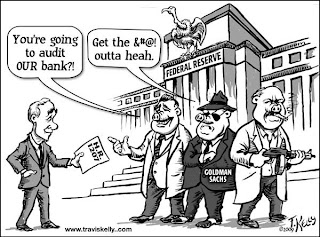 "Our overseas bases now cost us over $100 billion yearly. Since the DOD sops up over half of the disposable resources of the government, Obama must get control of it. His task will be difficult because the DOD and what President Eisenhower called the "military industrial complex" have cleverly portioned out the work and procurement on the program to virtually every congressional district. Congress will opt for the program even if it bankrupts America."

“They’ve got us hostage, man! The irony is that we have established a reverse economic Darwinism, where we ensure the survival of the fattest, not the fittest, the biggest, not the best.”

“Goldman Sachs made $3.44 billion in profit this past quarter, while the U.S deficit topped $1 trillion for the first time in the nation’s history. Since most of the increase in the federal deficit is due to bailing out the banks and salvaging the greater economy they helped destroy, why is the top investment bank doing so well? Because that was the plan, as devised by [Paulson], a former CEO of Goldman Sachs.”

“He had a $700 million conflict of interest and everything that he did while he was Treasury Secretary, every single thing that he did, has one explanation – what’s good for Hank Paulson?”
— Rep. Alan Grayson

"That's how audacious these assholes are. At least with other banks, you could say that they were just dumb — they believed what they were selling, and it blew them up. Goldman knew what it was doing."

"Only buy used, only use cash or bank debit cards, or only buy from local merchants. They can only steal from us if we enable them."

"You are a den of vipers. I intend to rout you out, and by the Eternal God I will rout you out. If the people only understood the rank injustice of our money and banking system, there would be a revolution before morning."


"Three out of four of the big health care firms lobbying on Capitol Hill have former members of Congress or government staff members on the payroll - more than 350 of them - and they're all fighting hard to prevent a public option, at a rate in excess of $1.4 million a day.

That's how it works. And it works that way because we let it. The game goes on and the insiders keep dealing themselves winning hands. Nothing will change - nothing - until the moneylenders are tossed out of the temple, the ATM's are wrested from the marble halls, and we tear down the sign they've placed on government - the one that reads, 'For Sale.' "

"The conviction that the economy must be autonomous, that it must be shielded from 'influences' of a moral character, has led man to abuse the economic process in a thoroughly destructive way. In the long term, these convictions have led to economic, social and political systems that trample upon personal and social freedom, and are therefore unable to deliver the justice that they promise."
— Pope Benedict in recent encyclical

"Although our civilization has been built on humanistic ideals, in this new age of 'free markets', everything-- science, commerce, agriculture and even seeds-- have become weapons in the hands of a few global corporation barons and their political fellow travelers. To achieve world domination, they no longer rely on bayonet-wielding soldiers. All they need is to control food production."

"I was expecting a thank you, all I got back in return was a hostile response. Some of the Madoff investors said I was behaving unprofessionally and was bad-mouthing a competitor. Oh, they were nasty. Nasty! They said the publications were jealous of Bernie. They were being anti-Semitic. People called me an anti-Semite. I'm not only a Jew, I live in Israel."
— Laura Goldman, who tried to warn Palm Beach Country Club investors about Madoff

"Secrecy protects the American people from grisly facts at variance with their self-image."

Travis...as always, your work is golden.
Posted by hANOVER fIST at 10:52 AM