Is Dominick Suter Back In The U.S.?

I found a great blog called Under The Radar Media a while ago; they had a very cogent breakdown of Urban Moving Systems's finances.

Reprinting below the text from the older site, which has moved to a WordPress blog.

Under The Radar Media has moved to WordPress
by Maasanova

Attention subscribers and readers, I've moved Under The Radar media to WordPress and will be posting all future content there. Click here to visit the new blog. If you are searching for a particular post, you will find it by scrolling down to the bottom or by searching though the post archive.

With the global awakening of what really happened on 9/11 surging ahead at full steam, many people are now aware of facts such as prior government knowledge of the attacks, the mysterious collapse of WTC 7, all of the military and terror drills going on at the same time of the attacks, and the possibility that WTC 1, 2 and 7 were brought down by controlled demolition, and not by fire.

What is not known by the majority of these people, but is as equally important as WTC 7 is the story of Urban Moving Systems. It is no surprise that the hidden history of Urban Moving Systems remains unknown to of the majority of the American population, and even within the 9/11 truth community, since it's story was never included in the official 9/11 Commission Report, and has been absent from all of the popular 9/11 "truth movies."

So what exactly was Urban Moving Systems and how does it tie into 9/11?

"Dominick Suter, owner of the company Urban Moving Systems, flees the country to Israel. The FBI later tells ABC News, “Urban Moving may have been providing cover for an Israeli intelligence operation.” Suter has been tied to the five Israeli agents caught filming the WTC attack. The FBI had questioned Suter around September 12, removing boxes of documents and a dozen computer hard drives. However, when the FBI returns a few days later, he is gone." [source: ABC News 6/21/2002]

So according to the FBI, an Israeli intelligence gathering operation was set up in Weehawken, NJ posing as a fake moving company, whose employees failed polygraph tests, whose owner was questioned but then mysteriously flees the US. And why did our corrupt media and elected officials conceal this fact from the American people via the 9/11 whitewash commission?!? Maybe it was because this inconvenient fact would have made it hard for the Bush Administration to pin the horrific terrorist attacks on suicidal Muslim highjackers? What do you think?

Well, it is time for the story of Urban Moving Systems to become as commonly known as WTC7 and controlled demolitions to the American people. On Tuesday, June 17, 2008 I was doing a bit of random 9/11 research and I came across a website called FedSpending.org, after I googled 'urban moving systems'.

FedSpending.org is a project of OMB Watch, a Washington based, non-profit citizen's watchdog group that is intended to promote government accountability and citizen participation. All I can say is that this website has delivered, and I was pleased to have come across this piece of internet gold with relatively little digging: 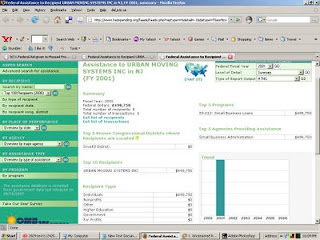 As you can see based on the government data that was released on August 28, 2007, Urban Moving Systems was awarded federal funding in the amount of $498,750 and non-federal funding in the amount of $166,250 for a total of $665,000 and the payout date was June 22, 2001. So in other words, our government, whether knowingly or unknowingly funded an Israeli intelligence gathering operation tied to an FBI investigation, with American taxpayer's dollars!

But wait, it gets even nastier. Urban Moving Systems was also a moving scam operation as well. In December of 2001, the State of New Jersey obtained a court order giving inspectors from Consumer Affairs access to the facility allowing all citizens who had goods stored at Urban Moving Systems' Weehawken warehouse access to retrieve their belongings. 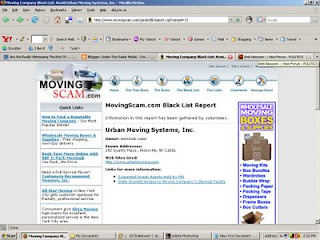 The State of New Jersey, at the same time, filed a lawsuit in Hudson County Superior Court against Urban Moving Systems and its owner Dominick Suter alleging violations of both the State's Consumer Fraud Act and regulations set forth in the Public Movers and Warehousing Licensing Act. You can read more about that here.

So...considering that this piece of subhuman garbage is still on the FBI's Wanted list, you would think that we've heard the last of him, yes?

Imagine my surprise...he's BACK!
Posted by hANOVER fIST at 5:40 AM