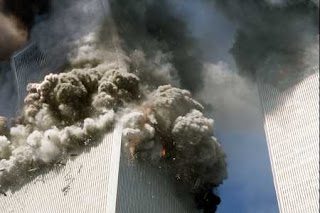 Thanks once again to WRH for the link.

So...if I possessed the requisite information, and could write about the events of September 11th, 2001 without venom welling up in me...well, it could possibly look something like this...but hardly to the detail this blogger has.

The closest I've come was to address the shite-fest known as the Popular Mechanics' Debunking The 9/11 Myths edited and published by Benjamin Chertoff, brother to DHS chief Michael Chertoff.

Of course, I am willing to address all aspects of the events of September 11th, 2001 with anyone who cares to debate me...but I'd rather not preach to the converted, and I'm bloody sick of explaining grade-school physics to dullards who will then repeat "mah Ghubbermint wud nev'r doo dat tah 'Murikanz" like a retarded mantra.

I'll be reading this on the subway today.
Posted by hANOVER fIST at 2:14 PM

Just a reminder for 9/11 Twoofaloons, Len Hart and hanover fist:

- One never lost money underestimating the intelligence of 9/11 Twoofaloons.

Alright...if it isn't the Hummer Queen.

Are you ready for a Dirty Sanchez, my boy?

Now, I must say, as a reader of Randi's forums, I'm surprised that any of his readers are indulged in such QUACKERY as the avoidance of SCIENCE in regards to the events of September 11th, 2001. I won't paint Randi with this brush, unless he himself comes here and tells me that 9/11 Truth is quackery, to my face.

I understand that you'll just put your lips to whatever comes through the glory hole, but you should be more discerning about what you put in your mouth.

Now...I would advise you to cease whatever mood-altering medications you're currently taking, go get a high-school physics manual, and look up FREEFALL.

Freefall only occurs when there is NO RESISTANCE.

Get it? NO RESISTANCE...like NO SUBSTRUCTURE HOLDING UP BUILDING 7.

If fire could destroy the substructure of a building (one holding diesel fuel, natch!), do you think that people would be allowed to SMOKE IN THEM? To COOK IN THEM?

I really do get the runs reading your dopey-ass comments...you think that you're witty, but you're just SAD.

Something bloody awful happened in our country, and you believe it's:

No...the right bloody answer is that the elements within our government must be stomped out like pernicious cockroaches. This is what America truly needs.

If you don't agree with that, then YOU are one of those who would like to see our economy equal with that of Mexico...and I, for one, don't wish to work for the equivalent of PESOS.

Len can speak for himself, but I'm sure he'll agree with this sentiment:

Why don't you go make up your OWN mind...I can listen to Rush, O'Reilly or Savage say it if I want.

Thanks for making my case for me, hanover, that one never lost money underestimating the intelligence of 9/11 Truthers. Your wackaloon post certainly confirms that.

Fortunately, I voted for Obama to stamp out Islamofascists like you and Len, both determined to destroy the United States and its values.

"A distinctive feature of conspiracy theories is their self-sealing quality.

Conspiracy theorists are not likely to be persuaded by an attempt to dispel their theories; they may even characterize that very attempt as further proof of the conspiracy. Because
those who hold conspiracy theories typically suffer from a “crippled epistemology,” in
accordance with which it is rational to hold such theories, the best response consists in
cognitive infiltration of extremist groups."

By your own posting, Hummer Queen, you disprove your own premise...what theories have you dispelled?

Are you, in fact, conjecturing that laws of physics changed on the 11th of September?

As for "islamofascists"...just because your favorite ZIONIST David Frum makes up some stupid term that doesn't exist in reality, doesn't mean I need to recognize it as a legitimate term.

It isn't...and the sooner you realize that you're raising on a busted flush, the sooner we can get on with prosecuting those responsible.

Lo and behold, I actually found someone who agrees 100% with you, hANOVER fUTZ:

That primate has everything over you, pal.

Did you even read the posting in question?

No...I think NOT - it would destroy your ENTIRE SYSTEM OF BELIEF...and why should you actually have to make decisions based on LOGIC rather than INANE RANTINGS?

How's this - since you won't reply to my queries regarding your so-called "debunking" of my 9/11 theories, let's just rattle off some information:

"Al-Qaeda" is a fabrication of the CIA - Osama bin Laden is actually Tim Osman, who is publicly known as a CIA asset.

The three buildings in the WTC complex all collapsed at "freefall" speeds.

Former Mayor Rudolph Giuliani had the steel carted off.

There were pools of molten metal that existed for weeks after the events of September 11th.

Larry Silverstein inadvertently admitted to the "pulling" of WTC7.

CNN and the BBC reported Building 7 as collapsed nearly half an hour before it did.

I'll stop with that...now, are you going to tell me that you haven't a single issue with ANYTHING thus far mentioned?

I await your response...and I'm hoping it's not another picture of a monkey, or I may come to the conclusion that you're tasking these pics in a mirror.

Mental illness and paranoia are increasing problems but you can get help, Hanover.

Here is a good resource for you. It will help you stop talking to the four walls in the room you've barricaded yourself in:

I'll take that bait - at least I consider your points; you just make up shite out of whole cloth.

* Agoraphobia is the fear of being alone outside of the home or in public places. People with this disorder fear escape might be difficult from such places in case of sudden incapacitation. They avoid crowds, tunnels, bridges, and public transportation. Normal activities gradually decrease until the fears and avoidance behavior dominate a person's life.

* Social Phobia is a persistent irrational fear of, and compelling desire to avoid, situations in which a person might be humiliated or embarrassed. Social Phobia, which causes people to avoid social engagements, causes significant distress because the person often realizes that his or her fear is excessive and unreasonable.

* Simple Phobia is persistent or irrational fear of, and compelling desire to avoid, a particular object or situation other than being alone. Phobic objects often include animals, and phobic situations frequently involve heights or closed spaces.

* Panic Disorder is a tendency to experience attacks of apprehension or fear during which a person feels some or all of the following symptoms: 1) difficulty in breathing (dyspnea); 2) heart palpitations; 3) chest pain or discomfort; 4) a choking or smothering sensation; 5) dizziness, vertigo, or unsteady feelings; 6) feelings of unreality; 7) tingling in hands or feet (paresthesias); 8) hot and cold flashes; 9) sweating; 10) faintness; 11) trembling or shaking; 12) fear of dying, going crazy, or doing something uncontrolled during an attack.

* Obsessive-Compulsive Disorder may be characterized by either obsessions or compulsions: Obsessions are recurrent, persistent ideas, thoughts, images, or impulses that are not voluntarily produced, but thoughts that invade a person's consciousness and are experienced as senseless or repugnant. Attempts are made to ignore or suppress these thoughts. Compulsions are repetitive and seemingly purposeful behaviors that are performed according to certain rules or in a stereotyped fashion. The behavior is not an end in itself, but is designed to produce or prevent some future event or situation. However, the activity either is not connected in a realistic way with the event or may be clearly excessive. The behavior is performed with a sense of subjective compulsion coupled with a desire to resist, at least initially. The act does not produce a sense of pleasure, but rather a release of tension. The behavior is a significant source of distress to the person or interferes with social or role functioning.

So, B.J. - just want to inform you of one disorder this organization missed:

* Ass-Hat Disorder is typically demonstrated by a lack of consideration of true, established facts, replaced by repeated phrases from talk-show hosts such as Sean Hannity, Bill O'Reilly, Rush Limbaugh, Michael Savage or Steve Maltzberg, also known as Ass-Hattery. The sufferer will constantly attack others who are not a part of their dialy delusions as suffering from the same disorder, so as to not to have to deal with reality.

So, you see, Hummer Boy, you make completely basseless accusations, and I state facts.

We could be Laurel and Hardy...except that your constant refutations of reality would give me constant cranky-ass, and my sphincter couldn't deal with the recurring irrigation.