Oh, dear...I've engaged in some reading this morning, and I wish to share some with you, dear readers.

First, I wish to reference DesertPeace's posting on the ever-excellent Carlos Latuff's cartoon. Next, I wish to invite you to read about free speech as it relates to the Holocaust at the Libertarian Alliance. Friedrich Paul Berg explains the impossibilities of the gas chambers purported to exist during WWII, as does this page from the National Association of Forensic Historians

I'm sure that some will say that this is quite odd reading for a sunny Saturday morning, but it's the kind of reading one will engage in when they have been continuously and falsely accused of being an ANTI-SEMITE, especially by the mental deficients at CounterKnowledge. Yes, those nitwits are back...looks as if they had a hosting issue for a couple of days...you would think that after the report by CBS News that came over SEVEN YEARS LATE, that finally admitted that the collapses of World Trade Center Buildings 1 & 2 could not have possibly been due solely to fires and/or impact; and that the collapse of the Saloman Brothers Building, also known as World Trade Center Building 7, defied all means tested for by NIST, that those nitwits would have removed all of their attack-dog postings and changed their name to ClownCarRetards dot com or something; yet, they persist in conflating 9/11 truth with anti-semitism...as if that makes any bloody sense!

Here's a posting by KnowledgeisPower:

Look at how bad this building got it and it didn’t fall: 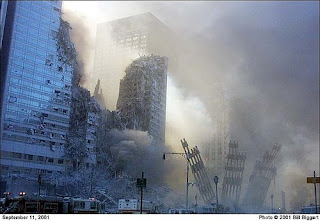 - Molten metal was found in the rubble of all three buildings many days after their collapse. Days after the disaster, aerial heat scans were taken showing the rubble of all three towers had extremely high-temperature debris in the piles. This is not a usual occurrence when buildings collapse. Nor can jet fuel create the heat required to create such mass amounts of molten metal. This molten metal was found in the rubble of WTC 7 building too even though it was not hit by an airplane. What this is consistent with is steel that has been turn molten by a high temperature substance. A well known substance that can cause structural steel to melt rapidly is called Thermite and the military type called Thermate. Thermate is explosive which is consistent with the many eyewitnesses that testified to hearing explosions.
- The magazine Popular Mechanics published a front page article trying to debunk conspiracy theories. The author of this piece is the cousin of Dept. of Homeland security chief Michael Chertoff (hf - my very first posting is a ripfest of this very piece...I got the runs reading this tripe, poisoning a magazine that I treasured in my youth).
- One of the key witnesses to the WTC 7 interior before it fell worked for the NYC government as Deputy Director, Emergency Services Department, New York City Housing Authority. His name is/was Barry Jennings. He has said on record that he heard explosions before it blew and testified there were dead bodies in it before it blew. He received threats to his life to shut up. He died in August of this year. His obituary and the news of his death have strangely been kept hidden from public view.
- Author Christopher Bollyn had been writing with great accuracy about the possibility that 9-11 was engineered by our own government and Israeli intelligence. Last year he was followed near his house. Soon thereafter he was tackled by these undercover agents on his own property. They said he threatened them. He waved at them. They arrested him and beat him up during the arrest. He has since stopped his reporting in fear for his safety and is considering moving to Norway or Sweden to escape the threats to his life.
- Reportedly an American Airlines flight crashed into the Pentagon on Sept 11th. There is no security camera footage made available for public viewing by the FBI showing this. They confiscated all security camera footage immediately after the alleged crash.
- The government officially says that Flight 93 plunged into the earth after a struggle by the passengers with the terrorists. Yet the was debris from this flight was strewn over many miles near Shanksville, PA. There are high school students from this area who testify on video they saw a fighter jet pass overhead at the time the plane fell from the sky. Dick Cheney is on record as having spoken these words, “It’s my understanding they’ve already taken a couple of aircraft out.”
- $100,000 was wired to hijacker Mohammed Atta by an Ahmad Umar Sheikh at the instance of Pakistani ISI Intelligence head General Mahmud Ahmed. On the morning of September 11, 2001, General Mahmud Ahmed was in Washington, DC meeting with ex-CIA agent and then congressman Porter Goss (Jesse Richard of TVNewsLies.org explains the outrageousness of this occurrence).
- On September 11th, 2001, ex-Israeli military were found in a white van in New Jersey by police. This was after a lady reported she saw Arab-dressed men near a white van celebrating the destruction of the World Trade Towers. This Arab clothing was found in the van of the ex-Israeli military. They later went on Israeli TV and said they were there to document the events of September 11th. How could they have known it was going to happen in order to document it?
- An executive at an Israeli instant-messaging company called Odigo has confirmed that before the attacks a message was mass-sent from someone on the service to fellow Odigo users that the attacks would be soon occurring.
- The Israeli shipping company Zim Shipping broke their lease in the WTC a week before the attacks occurred at a cost of $50,000.
- Both planes hit floors containing secured computer rooms in the WTC towers.
- Former Italian President Francesco Cossiga has stated publicly, “All the [intelligence services] of America and Europe…know well that the disastrous attack has been planned and realized from the Mossad, with the aid of the Zionist world in order to put under accusation the Arabic countries and in order to induce the western powers to take part … in Iraq [and] Afghanistan.”
- The FBI’s most wanted terrorist list does not attribute the attacks of 9-11 to Osama Bin Laden.
From a September 17, 2001 CNN report about Osama Bin Laden: In a statement issued to the Arabic satellite channel Al Jazeera, based in Qatar, bin Laden said, “The U.S. government has consistently blamed me for being behind every occasion its enemies attack it. I would like to assure the world that I did not plan the recent attacks, which seems to have been planned by people for personal reasons,” bin Laden’s statement said.
- Some of the terrorists received training at US military installations in the US.
- The FBI has admitted they had an informant living with some of the hijackers before the attacks occurred.
- Furthermore, concerning two of the highjackers, the CIA knew two of them were al-Qaeda intending to travel to the U.S, had them under its surveillance, and yet allowed them to do so
- MSNBC reported that coincidentally, “President Bush was expected to sign detailed plans for a worldwide war against al-Qaida two days before Sept. 11” and “The administration most likely was able to respond so quickly to the attacks because it simply had to pull the plans “off the shelf” ”
- The Defense intelligence Agency had a program called Able Danger that was tracking and gathering information on the terrorists before the attacks yet was mysteriously stymied to go further to actionable prevention.

Those are just a couple of the confluence of events that occurred on September 11th, 2001. If one references Occam's Razor, well, the simplest explanation is the most likely explanation.

Saying I hate peas in my fried rice does not make me anti-Chinese, does it?
Posted by hANOVER fIST at 6:33 AM