Legislators in at least nine States have had it with Federal meddling! They have therefore introduced resolutions asserting the sovereignty of their States in the current session, which began last month. Those States are Washington, New Hampshire, Arizona, Montana, Michigan, Missouri, Oklahoma, California, and Georgia. Twelve additional States reportedly are considering the introduction of such resolutions: Colorado, Hawaii, Pennsylvania, Arkansas, Idaho, Indiana, Alaska, Kansas, Alabama, Nevada, Maine, and Illinois (!).

Mississippi lawmakers have passed a bill to protect the state’s residents during martial law. On the Office of the Lieutenant Governor of Mississippi website, Phil Bryant announces the passage of SB 2036. The legislation “restricts the power of a peace officer to confiscate firearms and ammunitions in an emergency or during a time of martial law,” according to the website...

The president can call up the states's Guard units in a time of war. But when the mandate for war becomes obsolete, say members of the Bring the Guard Home: It's the Law (BTGH) campaign, sending those troops overseas is illegal. BTGH members and their allies are now sponsoring a chain of bills and resolutions in states across the country, demanding an investigation into the legality of deploying the Guard to Iraq, and a refusal to comply with any illegal federal orders...

"We believe that it would be a good thing for a court to be asked the question of whether a state Guard can be brought into federal service to fight in an overseas war - other than in an emergency - that does not have a proper Congressional authorization," Fisher said... 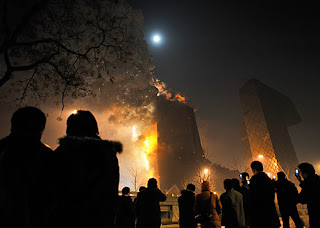 Debunkers' only response is to claim that no comparison to WTC 7 can be made, yet they feverishly compared completely dissimilar bridge collapses to twin towers in 2007

Three days after a towering inferno engulfed a 500 foot skyscraper in Beijing, debunkers have failed to come up with any answers as to why the building remained standing in comparison with WTC 7, which suffered a uniform 7 second implosion as a result of limited fires spread across just 8 floors on 9/11...

Welfare for the rich will cost $7000 per citizen

WASHINGTON — Even as Americans struggle with two wars and an economy in tatters, a USA TODAY/Gallup Poll finds majorities in favor of investigating some of the thorniest unfinished business from the Bush administration: Whether its tactics in the "war on terror" broke the law.

Close to two-thirds of those surveyed said there should be investigations into allegations that the Bush team used torture to interrogate terrorism suspects and its program of wiretapping U.S. citizens without getting warrants. Almost four in 10 favor criminal investigations and about a quarter want investigations without criminal charges. One-third said they want nothing to be done....

The Republican viewpoint was summed up recently by Sen. Arlen Specter, R-Pa. "If every administration started to re-examine what every prior administration did, there would be no end to it," he said. "This is not Latin America."

It's a matter of LAW, you doofus! And Latin America is a model we should emulate — they've been prosecuting their patriot criminals from the Dirty Wars 30 years ago.

An Associated Press investigation found that over the past five years, the money the military spends on winning hearts and minds at home and abroad has grown by 63 percent, to at least $4.7 billion this year, according to Department of Defense budgets and other documents. That's almost as much as it spent on body armor for troops in Iraq and Afghanistan between 2004 and 2006.

This year, the Pentagon will employ 27,000 people just for recruitment, advertising and public relations — almost as many as the total 30,000-person work force in the State Department.

Not to mention: the Pentagon maintains about 275 golf courses on bases around the world, and there are more personnel in military bands than in the State Dept.

The 1976 Symington Amendment prohibits most U.S. foreign aid to any country found trafficking in nuclear enrichment equipment or technology outside international safeguards. Israel has never signed the Nuclear Non-Proliferation Treaty (NPT). If U.S. presidents complied with the Symington Amendment, they would not deliver yearly aid packages to Israel totaling billions of dollars. Presidents make-believe that Israeli nuclear weapons don't exist so Congress can legally continue shoveling the lion's share of the U.S. foreign aid budget to Israel. But this thin pretense is now over. Since Carter's revelation, press outlets such as Reuters chat openly about how Israel's nukes mean that it does not qualify for U.S. aid.

Let me throw in my two cents here...I will stomp where many others fear to tread:

Beverly Eckert was MURDERED, along with the other passengers on that flight in order to keep her quiet.
Posted by hANOVER fIST at 2:31 PM