I Recovered My Orwellized Posting From CounterKnowledge - Now To Be Forever Known As Doop City! 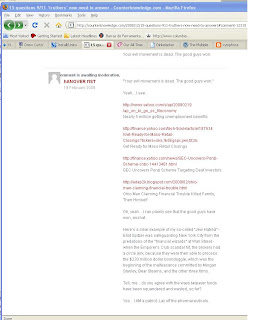 I found it, scumbags!

Printed below is the text that some nitwit on CounterKnowledge wished to make "not exist"...of course, I can always tell when some idiot is attempting some scumbaggery, and so I left my browser window open for the weekend. So...without further ado, my posted text:

Your comment is awaiting moderation.
hANOVER fIST said
on 19 February 2009

“Your evil movement is dead. The good guys won.”

Oh, yeah…I can plainly see that the good guys have won, asshat.

Here’s a clear example of my so-called “Jew Hatred” - Eliot Spitzer was safeguarding New York City from the predations of the “financial wizards” at Wall Street - when the Emporer’s Club scandal hit, the brokers had a circle jerk, because they were then able to process the $230 million dollar boondoggle, which was the beginning of the malfeasance committed by Morgan Stanley, Bear Stearns, and the other three firms.

Tell, me…do you agree with the ways taxpayer funds have been squandered and wasted, so far?

Yes…I AM a patriot. Lay off the pharmaceuticals.

Oh, you stupid pieces of garbage - you stand exposed for your complete scumbaggery and for being morally bankrupt.

I'd like to find out who was the piece of sub-human garbage who tried to run a 1984 on my comment.

Was it you, Joseph Welch? This is your posting, after all. I don't wish to accuse you, but I'd truly be interested to hear who was the moral coward who decided to remove this comment as if it didn't exist. Oh...and as to FangBeer, Ronald Wieck, TCS, Justa Joe and any of you other mental defectives...let me see if I can nail down your stupid supposition:

The opening salvo in the escalating series of horrors on 9/11/01 was a jet smashing into the North Tower of the World Trade Center at 8:46 AM. The takeover of Flight 11 had occurred almost 30 minutes earlier, but it was the shocking impact with one of the famous Twin Towers that awakened the world to the unfolding attack. By 9:00 AM, television stations across the globe had gone live with the story of the disaster in Lower Manhattan. Thus many cameras were rolling when the South Tower was impacted by a second jet at 9:03 AM, producing brilliant fireballs.
Impacts and Fireballs

The jet that hit the North Tower flew in perpendicular to the tower's northeast face, and impacted around the center of the 95th floor, producing an impact gash that extended from the 92nd to the 98th floor. Most of the plane apparently lodged in the tower's core structure, the only piece of aircraft to emerge from the opposite side being a dense piece of landing gear. The burning jet fuel, atomized on impact, spilled out of the impact gash and through broken windows on the southeast side.

In contrast, the jet that hit the South Tower, 18 minutes later, veered to the right just before impact and hit the rightmost third of the tower's southwest wall, producing an impact gash that extended from the 78th to the 94th floor. The diagonal trajectory through the building allowed most of the plane to miss the tower's core structure, and much of its fuselage appeared to emerge from the east corner, while a great deal of the fuel escaped from the northeast and southwest walls. This produced huge fireballs that developed outside the building, in contrast with the greater containment of the fireballs in the North Tower impact.
Impact Damage

The jet impacts destroyed sections of perimeter wall columns on the faces of the towers they hit. Although the collisions left imprints that extended out to the wingtips of the jets, the ends of the wings destroyed only the aluminum cladding covering the perimeter columns, not the steel columns themselves. The South Tower's wall was damaged less than the North Tower's, since the columns at its impact zone were made of thicker steel.

In the popular imagination, the jet fuel was the biggest factor in bringing down the towers. News reports emphasized that the transcontinental flights were fully loaded with fuel, while later government reports stated that the 767s were carrying about 10,000 of their 24,000-gallon capacity, and that most of the jet fuel likely burned off within five minutes. Thus, the jet fuel primarily served to ignite the post-crash fires rather than sustain them.

Okay...we've got that out of the way, yes? So...and I hope that this is clear...are you stating that the jet fuel that you purport was the weakening factor in regards to the steel not only ran down the remaining floors, but was also able to affect the floors ABOVE THE IMPACT?

How the hell did firefighters reach the floors they were able to before the collapses?

Understand this - you people are complete and utter morons, and I will now take every opportunity to point that out. I will spare no insult, and as I have proven your craven methods, now know that you idiots are deserving of no less.

This is going to be a great week.
Posted by hANOVER fIST at 7:55 AM

My guess is that it was "awaiting moderation" simply because the number of links you put in it triggered the automatic anti-spam feature on the counterknowledge site - it's a quite a commonly implemented WordPress feature (see here for more details). The fact that you go off on a rant about this shows a hilarious combination of paranoia and delusions of grandeur.

Let's face it you were hardly saying anything that would scare someone into deleting what you'd written - even if that was the way that sites like Counterknowledge worked. Perhaps delusions of adequacy would be more accurate...

"I was starting the believe that hANOVER fIST was little more than a troll, trying to stir up emotions with his/her illogic rantings- But once it was revealed he/her is a Holocaust denier, that convinced me, Hanover 1st is a REAL truther.

Interesting how my questions were ignored

1. I'm no scumbag neocon, so who bloody knows? But let's list what has been accomplished:

Disenfranchisement of the American people
Oxymoronic B.S. like the Patriot Act
Our soldiers put in harm's way for stupid campaigns like Afghanistan and Iraq
Turning America into a third-world nation
There's more, but I have a leg of lamb to eat...

2. Who gave what order? You're really being stupid here - Dick "Skeletor" Cheney was in charge that morning...Monkey Boy was hiding in a school, but being a dullard doesn't absolve you from going along with scumbaggery. Obviously, it's a lot more complicated that an "order" having been given.

3. Bush was nothing but an enabling moron...but once again, stupidity doesn't save you when you participate in the rape of the American people.

See...now, I just provided you some answers, not any stupid Protocols (get a spell-checker, nitwit!).

I am the real deal - don't try to lump me in with some weak-minded freaks who can't think for themselves, and who won't take responsibility for their own failings...what I can say with absolute certainty, is that George Walker Bush's actions did nothing to safeguard our security, and did everything to erode it.

Matt - thanks for your comment at my page. Of course, the fact that you may have restored the comment doesn't negate its original deletion. And no...I didn't think that it was such an earth-shattering posting, but I'm still awaiting a response to that query. Surely, all of you doops can't possibly think that this constant looting of taxpayers is a good thing, while idiots like John Thain install $35,000 toilets in their offices, while the common man wonders when their bloody jobs will be outsourced.

You're still assisting the cause of scumbaggery by believing in the fairytale of the Islamofascists attacking Americans.

Oh...and by the way...the NIST document posted mentions "Determine why and how WTC 1and WTC 2 collapsed following the initial impacts of the aircraft and how and why WTC 7 collapsed" on page XXV [the Preface for you slow guys], but NEVER explains it. I wasn't that long, after all - half of the bloody thing is tables and diagrams.