I've left this alone for a couple of days...but I just wish to reiterate that from everything I've heard, this guy is a bigger patsy that Sirhan Bishara Sirhan, Lee Harvey Oswald, James Earl Ray, John Hinckley Jr. and Mark David Chapman combined (of course, Sirhan, Chapman and Hinckley were Manchurian Candidates). Pak Alert Press posted this article, and I think it could prove a great help in deciding just what the bloody hell's going on at Fort Hood - Major Hasan Of Fort Hood: A Patsy In A Drill Gone Live? 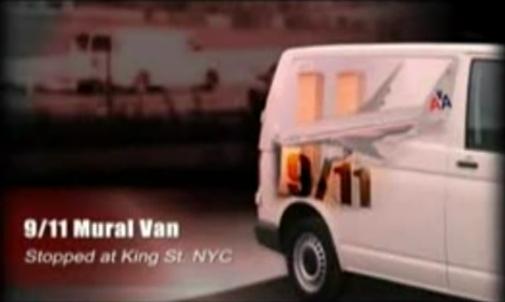 This is an actual photograph taken of a moving van that was stopped by NYC police on the evening of September 11, 2001, on King Street.
Reports of vans packed with explosives were confirmed at the World Trade Center on September 11th, 2001 as well as sub level explosions, among many other explosions. These vans were also discovered around the area, one had been exploded, another had been stopped for having a picture on the side of it with a plane flying into the World Trade Center and found with explosives in it, and many others. The FBI actually had confirmed that a device was found in the complex and the building had begun to evacuate. It was this evidence that made the Federal Agency to speculate that a van packed with explosives was parked in the garage which was detonated to help weaken the structure.

The vans belonged to a moving company owned by an Israeli who fled to Israel before he could be questioned. The same company employed several other Israeli citizens, here without valid visas, who were reported photographing and viedo-tapine the actual attacks on the World Trade Center, dancing happily and giving eachother the "high-five" hand slap. These are known as the "dancing Israelis" and have been much written about, however the reports were never investigated in the official 911 report. Residents of an apartment who witnessed this called police who detained the men and noted that the van also had the suspicious mural. The men were later freed and returned back to Israel with no further comment by investigating authorities.

The New York City Authorities released the recordings of the radios from that day where one officer reports a van actually exploding and him needing assistance ASAP. Another series of radio communication confirms that a van was pulled over for having a mural on the side of it depicting a plane flying into the World Trade Center. Reference to the mural van was also made in the February 2006 Norman Y. Mineta International Institute for Surface Transportation Policy Studies (MTI) report entitled: "Saving City Lifelines: Lessons Learned in the 9-11 Terrorist Attacks".

The first, and most mysterious, piece of evidence to highlight comes from an actual transmission from audio from Channel 30 NYC, one of the emergency communications channels, on the morning of September 11 which makes reference to the discovery of a van full of explosives and two suspects located between 6th and 7th on King Street , some blocks away from the World Trade Center.

The bizarre thing about the transmission is that the responder makes reference to a mural painted on the side of the van depicting a "remote controlled plane" diving into New York City.

A full transcript follows the audio:

The indication is that the suspects ran away when the van was stopped and were then apprehended following some sort of struggle. It is then stated that the van has actually exploded.

Oh...lest I forget - here's a link to the Complete Guide To Killing Non-Jews.
Posted by hANOVER fIST at 6:58 AM