The Mystery of Dyatlov Pass‏

I'm a sucker for cold case files and unsolved mysteries, and I've never encountered one more bizarre this -- the Dyatlov Pass incident in Russia, 1959. A group of 9 college students go on a hiking/skiing trip in the Urals -- all found dead in inexplicable circumstances.

How creepy do you want it?

The famously eerie tale of nine dead Russian hikers, with all the bizarre details you can handle (http://www.sfgate.com/cgi-bin/article.cgi?f=/g/a/2008/02/27/notes022708.DTL#ixzz0ilCDCA7B)

Here are the basic facts:

• The victims’ tent was “cut from the inside”.
• Five in the group exited the tent wearing little or no clothing. Four others were dressed normally.
• There were many internal injuries and broken bones, but little or no external damage was found.
• One person was missing her tongue.
• The victims had a “strange orange tan” and grey hair at their funeral.
• High levels of radiation were found at the scene of the accident and on the victims’ clothes.
• Some of the victims may have been blinded.
• There were “strange orange spheres” in the sky during the time of the Dyatlov pass accident.
This site (http://www.aquiziam.com/dyatlov_pass_answers.html) dispels much of the misinfo grown up around the case, and uses new sources and evidence to disprove the avalanche theory and the secret Soviet weapons testing theory -- the favorite explanations of so-called "skeptics," despite the total lack of evidence for such explanations. This site concludes:

However, these now broadly accepted facts do not diminish the mystery – in a strange way they enhance it. As we have repeatedly said throughout these pages ... Why did nine, experienced and sensible, ski-hikers abandon their tent in such a hurry and in weather conditions that were hostile and almost certain to lead to their deaths? What really happened that night?

For a laugh, and to demonstrate the absurd lengths to which purported "rationalists" will go to shoehorn the inexplicable into their comforting frame of reference, see this account:

The whole "debunking" screed is pretty well debunked by a commentator:

It’s very funny how people with zero knowledge about the living conditions in USSR at that time (almost 50 years ago) and the weather and terrain specifics of the northern Urals can make some assumptions and prove or disprove theories. I was born in Sverdlovsk and graduated from the same Urals Polytechnic College as all the nine from the Dyatlov’s group so IMHO can shed some light on the questionable facts.

The temperature on February 1, 1959 was minus 21 -25 C (about minus 10-12 F) with winds on the top of the mountain up to 15 m/s (45 ft/s). Nobody in the sound mind would venture to go outside undressed in this kind of weather expecting “to survive for a time outside the tent” … “if it was bearable”. They just acted in panic with no logical reasoning and no expectations, like people jumping down from the WTC didn’t really expect to stay alive.

There were no bruises and breaks in the skin of the injured except unremarkable cuts and scratches, but the injuries were massive: one girl had 12 (!!!) ribs broken on left and right sides. These injuries can’t be explained by a mere fall on the snow or even a force of explosion as there were no broken limbs and signs of hematomas. The girl with the missing tongue could not have “bitten it off due to the panic” since not only the tongue but the entire oral cavity lining was missing as it was torn off.

Even more hilarious for me was reading the comments. Darling Sarah H, they didn’t have Coleman-type gas lanterns with thorium mantles in Russia in 1959. They didn’t have any camping gas lanterns, period. They didn’t have sleeping bags, camping pads as well as other essential camping gear. The tent was self-made sewn from 2 old smaller tents. The Dyatlov’s slept on the empty rucksacks wrapped themselves in the wool blankets. They only had one flashlight and used it sparingly to save the battery. It was later found on the tent’s roof left in the switched-on position as if somebody tried to mark the tent’s location.

As for answering the question why the investigators even checked the radioactive contamination of the bodies in the first place one has to be in the state of mind of policemen in the midst of the cold war hysteria in Urals, where every city had secret weaponry manufactures.

The case is very similar to the famous Mary Celeste mystery (http://en.wikipedia.org/wiki/Mary_Celeste), which I consider solved by a brilliant piece of sleuthing and deduction by author Brian Hicks (http://www.amazon.com/Ghost-Ship-Mysterious-Celeste-Missing/dp/0345466659/ref=sr_1_2?ie=UTF8&s=books&qid=1269131130&sr=8-2), without resort to any "paranormal" explanations. Dyatlov Pass, however, still defies any plausible explanation.


The party before the incident: 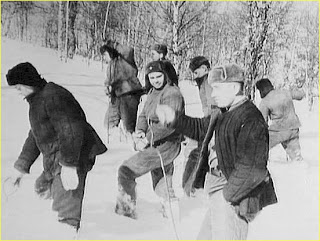 Memorial to the lost party in the Urals 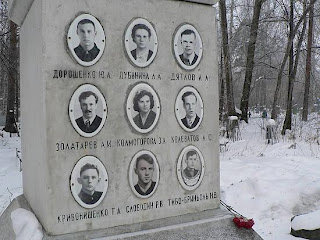 For those interested in this most bizarre mystery, this page has a timeline of events and chart showing the victims' locations and determination of death (the most baffling element of the tragedy), along with a good narrative and exploration of the various theories on page 2.
http://www.aquiziam.com/dyatlov_pass_1.html


This Fortean Times page also has a good narrative, with some additional information:
http://www.forteantimes.com/features/articles/1562/the_dyatlov_pass_incident.html
Many people gravitate toward "paranormal" explanations for such events that defy "normal" explanation. While I am convinced of the reality of much paranormal phenomena, those solutions should be excluded until all else fails. The Mary Celeste mystery is a case in point -- a much more mundane, though equally horrifying solution was proposed by author Brian Hicks -- one that accounts for ALL of the known evidence and anomalies, which any theory must do.

Mystery finally solved, at least to my satisfaction -- after over 100 years of troubled speculation.
In the Dyatlov case, many have pointed to the radiation contamination, and the eyewitness accounts of "glowing orbs" in the sky as evidence of a UFO event, prompting the "skeptics" to launch attacks and ride roughshod over facts construed as indicative of otherworldly agency.

Although "UFO" has become synonymous with "aliens in flying saucers" in popular parlance, it means only "Unidentified Flying Object," which could include many things, both natural (Earth Lights and ball lightning) and man-made. There is considerable evidence that some governments have been experimenting with novel propulsion systems in "deep black" projects since the end of WWII, when Nazi scientists first produced experimental saucer-shaped aircraft -- yes, "anti-gravity" craft, that might account for many UFO sightings.

Another factor proposed to explain the anomalous injuries, as well as the party's seeming disorientation and terror: infrasound, produced by both natural and artificial processes:
Infrasound
http://www.lowertheboom.org/trice/infrasound.htm
This site notes:

"Acoustic Bullets. High power, very low frequency waves emitted from one to two meter antenna dishes. Results in blunt object trauma from waves generated in front of the target. Effects range from discomfort to death. A Russian device that can propel a 10-hertz sonic bullet the size of a baseball hundreds of yards is thought to exist. Proposed fixed site defense. Also known as sonic bullets."

Families of the Dyatlov victims have established a foundation and are prodding the Russian government to re-investigate the case and release any documents that might still be classified.