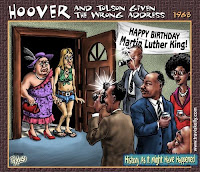 This image was sent to me by my bud, Travis Kelly! In his own words,:"And you can get that image and others on T-shirts, mousepads and other stuff at my CafePress site (cheap!)":

In my opinion, Travis is underselling his merchandise! Let's go to it, folks! Show some love!

But did you know that:

James Earl Ray was a patsy for the real murderers, simply because the shot was IMPOSSIBLE TO MAKE?

The Director of the FBI, J. Edgar Hoover, was a hypocritical cross-dressing, self-hating queer (and something else that he kept hidden from America...read on) who loathed MLK, Jr., possibly because King was granted the one accolade he would NEVER be able to obtain; the Nobel Peace Prize? Though, now that Albert "Global Warming? Oh...I just meant my newly-fattened pockets!" Gore has been awarded such for his fraudulent promotion of a phenomenon that HAS NO BASIS IN REALITY, the award's prestige has been cheapened in my eyes.

The Memphis police department, on that day, removed ALL BLACK OFFICERS from patrol, reassigning them to tours and duties that would take them far away from the scene of the crime?

Well, a lot of that information is included below.

Now, I'm sure that some of you who may come across this page might be scratching their craniums, "What the hey - I thought this was a 9/11 conspiracy page! Why do I have to read about Martin Luther King, Jr.? I'm not even Black, or even remotely related to anyone who would care? In fact, I'm the Grand Dragon of the KKK! I just wanna read about dumb space lasers melting the buildings, so I can laugh at you idiots! The Gubbermint has benn berry good to me!"

In other words...what you did not care about in the past has transmogrified to an unimaginable state of being at the present time.

One last bit: "Those who ignore history are doomed to repeat it."

Before you check out the information from MR's MLK section, here's the rest of Reverend Jeremiah Wright's speech...the part you DIDN'T hear:

This information was originally reproduced from Michael Rivero's What Really Happened news/errata blog - please give it a visit if you haven't done so - I promise you it's also good for real belly laughs once in a while! But buy some stuff from him, too!

Okay...I promised to remove Michael Rivero's posting and come up with one of my own...so here goes (this is the only posting that WRH has ever promoted, and that came with a snarky comment; IIRC, the comment was, "comments on my comments!" Ah, such is life...):

I listen to WBAI (99.5 FM) whenever I can. There are a number of shows that I prefer over the others - I'm an on-and-off listener of NiteShift, The Expert Witness, Off The Hook, Building Bridges, The Personal Computer Show, Radio GBE/The Global Beat Experience, Cat Radio Cafe, Any Saturday with David Rothenberg, Hour Of The Wolf, Back Of The Book, Citizen K (when it was on, as well as Gary Null's show and Robert Knight's program, as well), On The Count, Al Lewis Lives, Radio Free Eireann, Everything Old Is New Again, Free Time For Equal Thought, As I Please, Through The Opera Glass, Here Of A Sunday Morning, Counterspin, Taking Aim, The Christmas Coup Comedy Players, Weaponry, Under The Learning Tree, Burn Baby Burn/Clappers, Mass Backwards, All Mixed Up, The Liquid Sound Lounge and Morning Dew.

But the show that most concerns this posting is The Caldwell Chronicle, featuring Earl Caldwell.

Earl Caldwell is a world-renowned journalist who has worked for The New York Times, the New York Daily News and The Amsterdam News. He was also the only reporter on the scene when Dr. Martin Luther King, Jr. was assassinated. At the time, the murder was blamed upon James Earl Ray.

It has since been proven that James Earl Ray was a patsy - William Pepper had won a case for the King estate proving that his assassination was the result of a conspiracy, including one Loyd Jowers, the owner of Jim's Grill, where it was purported that the plans for the act took place.

Simply put: the assassination COULD NOT HAVE TAKEN PLACE AS THE OFFICIAL NARRATIVE STATES.

I'll refer you to Michael Rivero's page for the pictures that you'll need to map out the scenario in your head...but just remark upon the extraordinary lengths that were undertaken to ensure that the story could not be challenged:

The bushes where some witnesses saw smoke were CUT DOWN THE NEXT MORNING;
The branches of the tree that originally obfuscated the view between the boarding house bathroom window and the balcony of the Lorraine Motel were removed;
All of the Black officers of the Memphis Police Department were ordered to report away from the scene of the crime;
Charles Stephens was purported to be a witness to James Earl Ray's shooting of King; however, his wife Grace countered his eyewitness statement with the information that Charles was thirteen sheets to the wind! The authorities sided with Charles, and had Grace committed to a mental institution (I believe that she has sought asylum out of the United States);
As in the John Fitzgerald Kennedy assassination, there were doubles of James Earl Ray to dissuade unforeseen elements from derailing the action;
Most importantly...THE ANGLE OF THE PURPORTED SHOT WAS IMPOSSIBLE, MUCH LESS THE ACTUAL FEASIBILITY OF THE SHOT.

In short...what we were told by the government was a GODDAMN LIE.

And to top it all off...it has come to light that the mighty J. Edgar Hoover was born to a Black family!

How bloody crazy is THAT?!?


Additional information on the assassination of Martin Luther King and evidence of a cover-up can be found HERE - just so you are all aware, Mike Rivero doesn't promote this blog. That's okay - I'm not doing this for fame; I'm doing this because someone needs to do the right thing. He does a terrific job in illustrating the absolute impossibility of the "official narrative", so read on, dear readers.

A good resource for some of the "factoids" mentioned therein is Paradox Press' Big Book Of Conspiracies, written by Doug Moench and illustrated by some of the best cartoonists illustrating sequential fiction.
Posted by hANOVER fIST at 3:45 PM