The Blinders Are Coming Off, Part Two 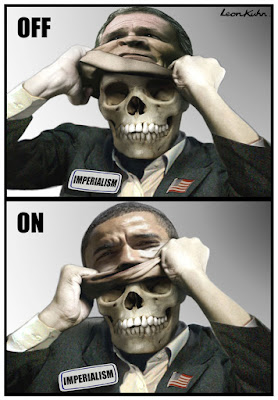 There have been a number of questionable moves in both directions by the Anointed One, our Commander-In-Chief, Barack Hussein Obama. In one instance, he has continued the policies of the Monkey King himself, George Walker Bush, the former pResident. His Chief Of Staff, Rahm Emanuel, is the son of a terrorist and possess dual loyalties...and no man can serve two masters equally. We do know that he enlisted in the Army...in Israel. I guess we can all tell where those loyalties truly lie.

On the other hand, he has given lip service in regards to being even-handed in his dealings with the Middle East, especially given our uneven dealing with most of the denizens of the Middle East. The speech in Cairo was very promising, but unfortunately, people are still dying by the bushelfuls, because Obama keeps on signing those checks. That is the only way to force an end to the mounting scumbaggery occurring in the Middle East.

Obama seems to be whining about the level and method of coverage in this day and age; he should know better. He would be better off imploring the news organizations to throw off their obedience collars and return to being watchdogs for WE THE PEOPLE and against the corporations.

I'm actually interested in what's going to happen this afternoon between Obama and current New York State Governor David Paterson, what with the rumors going around that he has asked that Paterson not run in 2010. As of 5:00 PM EST, Paterson has not deferred to Obama's judgement.

Let's see what occurs.
Posted by hANOVER fIST at 9:40 AM