More Spying From The Only Democracy In The Middle East; The Top 10 Conservative Idiots #375

Before I get into the next act of scumbaggery by our pal in the Middle East, let's take a quick look at Democratic Underground's Top 10 Conservative Idiots - it's a fun read.

Now...hold on a second! Didn't I state something in the title of this posting about a possible spying scandal involving our only friend in the Middle East, Israel? Why would our friend spy on us? Aren't we working in lockstep to fight the War on Terror?

US scientist charged with spying 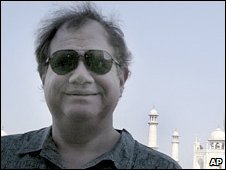 An American scientist who worked for the US defence department and the space agency Nasa has been charged with attempted espionage, officials say.

Stewart David Nozette tried to give classified information to a person whom he believed was an Israeli intelligence officer, the justice department said.

The 52-year-old, who once had top security clearance, was arrested on Monday by FBI agents, it added.

The complaint does not allege Israel or anyone acting for it violated US law.

Mr Nozette, who is expected to appear in court in Washington on Tuesday, faces a maximum sentence of life in prison if convicted.

"The conduct alleged in this complaint is serious and should serve as a warning to anyone who would consider compromising our nation's secrets for profit," said US Assistant Attorney General David Kris.

According to an affidavit, Mr Nozette worked at the White House on the National Space Council from 1989 to 1990, where he developed a radar experiment that purportedly discovered water on the Moon.


The answers contained information... that concerned US satellites, early warning systems, means of defence or retaliation against large-scale attack, communications intelligence information, and major elements of defence strategy
US Department of Justice

He then spent 10 years at the Department of Energy's Lawrence Livermore National Laboratory, where he designed highly advanced technology.

In 2000, he set up a company that developed advanced technology for the US government, including for the Pentagon and Nasa.

"From 1989 through 2006, Nozette held security clearances as high as 'top secret' and had regular, frequent access to classified information and documents related to the US national defence," the justice department said in a statement.

Last month, Mr Nozette was contacted by an undercover FBI agent posing as an Israeli intelligence officer, whom he allegedly told he would be willing to regularly answer questions about classified information in exchange for money and an Israeli passport.

Over the course of the next month, the scientist provided letters with answers containing information "classified as both 'top secret' and 'secret' that concerned US satellites, early warning systems, means of defence or retaliation against large-scale attack, communications intelligence information, and major elements of defence strategy", the justice department said.

Dear readers...it's time to call for a complete removal of EVERYONE with dual-loyalties from our government.

If you haven't, you all really need to read Christopher Ketcham's excellent CounterPunch piece on Israeli Spying in the U.S. - you'll thank me for it.
Posted by hANOVER fIST at 6:52 AM