Al Franken eviscerates a Stepford spokeswoman from the Hudson Institute on medical bankruptcies. Anyone who thought "Stuart Smiley" would be a lightweight in the Senate is wrong -- he's tough, well-prepared and he doesn't pull any punches:

"How many medical bankruptcies were there in Switzerland last year?"

"How many medical bankruptcies were there in France last year?"

Ratigan: "Unless the government and people like you that lobby to the exemptions that allow banks to [speculate with taxpayer money] get out of the way, we will never have fair play again in this country and we'll have job creation by virtue of taxpayer theft, which is ultimately destructive, and I would argue, treasonous to this country... Especially when you talk nonsense."


The US as Failed State

The US has every characteristic of a failed state.

The US government’s current operating budget is dependent on foreign financing and money creation.

Too politically weak to be able to advance its interests through diplomacy, the US relies on terrorism and military aggression.

Costs are out of control, and priorities are skewed in the interest of rich organized interest groups at the expense of the vast majority of citizens. For example, war at all cost, which enriches the armaments industry, the officer corps and the financial firms that handle the war’s financing, takes precedence over the needs of American citizens. There is no money to provide the uninsured with health care, but Pentagon officials have told the Defense Appropriations Subcommittee in the House that every gallon of gasoline delivered to US troops in Afghanistan costs American taxpayers $400.

“It is a number that we were not aware of and it is worrisome,” said Rep. John Murtha, chairman of the subcommittee.

According to reports, the US Marines in Afghanistan use 800,000 gallons of gasoline per day. At $400 per gallon, that comes to a $320,000,000 daily fuel bill for the Marines alone. Only a country totally out of control would squander resources in this way.

While the US government squanders $400 per gallon of gasoline in order to kill women and children in Afghanistan, many millions of Americans have lost their jobs and their homes and are experiencing the kind of misery that is the daily life of poor third world peoples. Americans are living in their cars and in public parks. America’s cities, towns, and states are suffering from the costs of economic dislocations and the reduction in tax revenues from the economy’s decline. Yet, Obama has sent more troops to Afghanistan, a country half way around the world that is not a threat to America.

It costs $750,000 per year for each soldier we have in Afghanistan. The soldiers, who are at risk of life and limb, are paid a pittance, but all of the privatized services to the military are rolling in excess profits. One of the great frauds perpetuated on the American people was the privatization of services that the US military traditionally performed for itself. “Our” elected leaders could not resist any opportunity to create at taxpayers’ expense private wealth that could be recycled to politicians in campaign contributions.

Republicans and Democrats on the take from the private insurance companies maintain that the US cannot afford to provide Americans with health care and that cuts must be made even in Social Security and Medicare. So how can the US afford bankrupting wars, much less totally pointless wars that serve no American interest?

The enormous scale of foreign borrowing and money creation necessary to finance Washington’s wars are sending the dollar to historic lows. The dollar has even experienced large declines relative to currencies of third world countries such as Botswana and Brazil. The decline in the dollar’s value reduces the purchasing power of Americans’ already declining incomes.

Despite the lowest level of housing starts in 64 years, the US housing market is flooded with unsold homes, and financial institutions have a huge and rising inventory of foreclosed homes not yet on the market.

Industrial production has collapsed to the level of 1999, wiping out a decade of growth in industrial output.

The enormous bank reserves created by the Federal Reserve are not finding their way into the economy. Instead, the banks are hoarding the reserves as insurance against the fraudulent derivatives that they purchased from the gangster Wall Street investment banks.

The regulatory agencies have been corrupted by private interests. Frontline reports that Alan Greenspan, Robert Rubin, and Larry Summers blocked Brooksley Born, the head of the Commodity Futures Trading Commission from regulating derivatives. President Obama rewarded Larry Summers for his idiocy by appointing him Director of the National Economic Council. What this means is that profits for Wall Street will continue to be leeched from the diminishing blood supply of the American economy.

An unmistakable sign of third world despotism is a police force that sees the pubic as the enemy. Thanks to the federal government, our local police forces are now militarized and imbued with hostile attitudes toward the public. SWAT teams have proliferated, and even small towns now have police forces with the firepower of US Special Forces. Summons are increasingly delivered by SWAT teams that tyrannize citizens with broken down doors, a $400 or $500 repair born by the tyrannized resident. Recently a mayor and his family were the recipients of incompetence by the town’s local SWAT team, which mistakenly wrecked the mayor’s home, terrorized his family, and killed the family’s two friendly Labrador dogs.

If a town’s mayor can be treated in this way, what do you think is the fate of the poor white or black? Or the idealistic student who protests his government’s inhumanity?

In any failed state, the greatest threat to the population comes from the government and the police. That is certainly the situation today in the USA. Americans have no greater enemy than their own government. Washington is controlled by interest groups that enrich themselves at the expense of the American people.

The one percent that comprise the superrich are laughing as they say, “let them eat cake.” 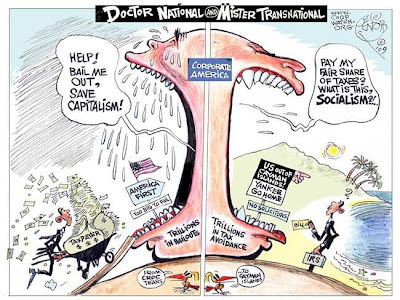 Russia's vote to endorse the Goldstone Gaza report in the United Nations Human Rights Council last Friday was an important, milestone event both for Palestine and for Russia. For Palestine, this vote opened a way to try and sentence Israeli mass-murderers, and thus ushered Israel into a new era of responsibility after a long period of Wild West-style, Colt-45 justice. For Russia, this vote has proved to its own country and to the world that it is free from American and Zionist diktat and able to navigate its own policy...

Many people doubted his impartiality: Goldstone is a Jew -- a self-described Zionist, well-connected to Israel – he sits on the board of its University and his daughter even lived in Tel Aviv for a while. Goldstone was guided by his conscience and not by his blood. He went to Gaza, invested a lot of time and effort, and concluded: Israel has committed war crimes and crimes against humanity. He recommended the case be transferred to the ICC court in the Hague. Israel did not cooperate and tried to undermine and block the report, but failed. That was the first Israeli defeat...

Israel was infuriated by this development. The Jewish State considered itself invulnerable behind the triple defense of the Sixth Fleet, the US Senate and the Holocaust Museum. President Obama's soft request to freeze the settlement building was met in Tel Aviv by what Internet chat calls "lol". He was ridiculed. Ehud Barak and Bibi Netanyahu even sped up their building plans in the West Bank and East Jerusalem in order to show that they could not care less. And now, all of a sudden, Jewish ministers of state are going to be judged as if they were Serbs or Sudanese.

Israeli leaders activated their main reserves, the US State Department and the Lobby. A few days ago I spoke with Martin Indyk, former US ambassador to Tel Aviv, and he confirmed that the US State Department will do all it can to stop the Goldstone report before it gets to the Security Council. Another American veto would not look good. Worse, an insulted and hurt Obama might just forget to veto an anti-Israeli decision...

So many people in the US and France, in Egypt and Palestine are tired of Israeli intransigence, egotism, hypocrisy and impunity. That is why so much hope was invested in Barack Obama after his Cairo talk. Obama had promised to cut Israel down to size, but meanwhile Israel cut him down to smaller-than-life. That is why the US is going down just like the Titanic, undermined by a Lobby iceberg and fleeced by financial wizards. Now Russia is coming under tremendous pressure from the US and other Zionist-led groups and states. We should pray she will withstand it and maintain her and our dignity.