Another Lying Whore Heard From...

Bob Cesca almost made me do a spit-take! 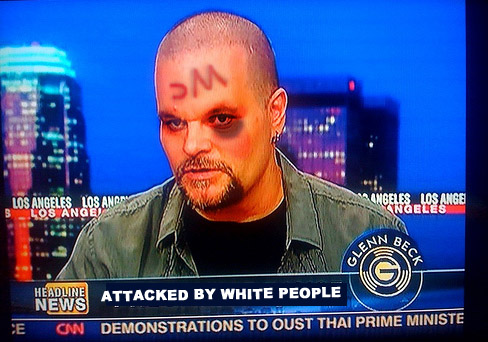 Geez...you'd think that people would give up on blaming the "anonymous Black guy" after the Susan Smith incident...but, apparently, it has not quite lost its fashion.

A McCain/Palin volunteer, Ashley Todd, stated that she was robbed at an ATM in Bloomfield, whereupon the "attacker" noticed a McCain/Palin sticker on her vehicle, whereupon said "attacker" assaulted the victim, leaving the letter B carved into her cheek.


Heinous, no? Just terrible...I mean, can't we all get along?

Unfortunately, there were a few inconsistencies in regards to the attack.

In case you actually missed the meat of the story...the B carved in her face by the "unknown Black guy" was carved INVERSELY.

I'm gonna have a bit of fun here...isn't it every day that people are complaining about "uneducated minorities" and the like? Well..."uneducated" is one thing...but an INVERSE letter?

The ATM camera also disputed her testimony...the "victim" was given a polygraph exam...the results were not offered to the public, but I can surmise that hey weren't offered because they were inconclusive. The authorities have released that the "victim" suffers from "mental issues".

Wouldn't it be a hoot if it were a DYSLEXIC who performed the heinous act? Of course, that point is moot, because the "victim" confessed to the non-existence of this dyslexic assailant.

Now, should we examine the reasons for this hoax? Should I go and peruse my copy of the DSM-IV? No...it doesn't really require that much effort. I can tell you exactly why this was done:

The RNC and the McCain/Palin campaign have absolutely NOTHING to offer to WE THE PEOPLE except for moreof the same shite that they've offered since 1980...October Surprises, "voodoo economics", "greed is good", the S&L crisis, manipulation of the markets to the detriment of regular Americans, ill-advised and falsely-initiated wars, the dumbing-down of Americans, CALEA, HAVA, and vote fraud, not to mention the events of September 11th, 2001. This is not to say that the Democratic Party is all shits and giggles; "Slick Willy" Clinton was responsible for selling valuable secrets to other countries, and placated the Black population while at the same time reversing advances made by civil rights groups. But please understand...what has been put forth as the "Republican" administration bears NO RESEMBLANCE WHATSOEVER to true Republican ideals.

My Republican party has been co-opted by losers, chickenhawks, thieves and traitors to our great nation, and with this cowardly act, they have distinguished themselves as Republicans-In-Name-Only, or RINOs.

You people need to call yourselves something else, like the C0ck-Smokers, or something just as appropriate - I'm sick and tired of having you scumbags "represent" my ideals, which you DO NOT!

I wish that people who lied about their political affiliations would spontaneously combust - there would be a lot less scumbaggery occurring.

Anywho...Ashley...why don't you come clean, and tell us who put you up to such a STUPID STUNT? I don't believe that you're such a great thinker that you could've come up with that brainstorm all by yourself.

After all, Morton Downey, Jr. beat you to it by a couple of years...here's more.