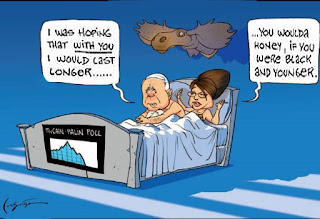 Recently discovered two things: the first being hanger steak...apparently, it is just an awesome, heretofore unknown cut of meat (at least, the GF had no bloody idea what it was!), and I did a hell of a job making dinner two Sundays ago.

The second thing I recently discovered was a blog titled Pennsylvania For John McCain. You know...I didn't know that the retarded were allowed to procreate.

Yes...I know. That was unbelievably harsh...but we need to address something very important. I'm going back to 1963 and to the assassination of President John Fitzgerald Kennedy, and I want for you to put on your critical thinking caps. I want for you to think of the possibilities of any "lone nut" assassinating ANY PRESIDENTIAL NOMINEE/CANDIDATE - I surmise that you'll agree with me that the possibility is near nil...that is, at least, if all of the spying being performed by our clandestine services are performing in the way that they should - that being ensuring the safety of WE THE PEOPLE, and not merely attempting to stifle lawful dissent to policies designed to undermine and remove our rights as Americans.

So...there's a bit of talk about assassinating the Democratic nominee for the office of the President of the United States. We have actually had successful assassinations...but by whom were they performed? Let's list attempts as well (* denotes that I disagree with the findings):

Andrew Jackson was shot at by Richard Lawrence; both shots misfired

James A. Garfield was assassinated by Charles J. Guiteau

Not necessarily pertinent, but being included regardless, Robert Francis Kennedy was killed by Sirhan Bishara Sirhan*

George Wallace was shot by Arthur Bremer; who had previously threatened to assassinate Richard Milhous Nixon; Nixon was also threatened by Samuel Byck

Gerald Ford had two attempts on his life; the first by Lynette "Squeaky" Fromme, the second by Sara Jane Moore

George Herbert Walker Bush was said to have been threatened by sixteen men in the alleged employment of Saddam Hussein, in retaliation for Gulf War the First; attack foiled by Kuwaiti officials

William Jefferson Clinton was said to have been threatened first by Frank Eugene Corder, who flew a single-engine Cessna into the White House; Francisco Martin Duran fired at least 29 shots with a semi-automatic rifle at the White House

George Walker Bush was supposedly threatened by Robert Pickett, who shot at the White House; Vladimir Arutyunian attacked him with a hand grenade - amazingly, the handkerchief used to obfuscate its appearance delayed the explosion

So...that was a mouthful. There are events that I dispute occurred as recorded; please feel free to write in and challenge my discernments - any and all arguments are welcome.

So...I did bring up a lot of distasteful memories for some...but there's a reason I've done so, and I could have begun and ended with JFK's assassination...and that point is THIS:

There is no bloody way that what occurred in 1963 could EVER recur in this, these modern times. There are simply too many media devices being used by everyday people - if we possessed this level of technology back in 1963, we would never have heard of Dan Rather...Abraham Zapruder would simply have been one of a cast of thousands to have captured the footage of the day; I daresay that the attempt may have been forestalled with the advent of personal media recording devices.

At the very least, Thane Eugene Cesar would either be rotting away in prison or feeding worms for his role in the assassination of RFK.
Posted by hANOVER fIST at 7:58 AM