Challenge McCain's Lies & Smears when he comes through NYC on Tuesday, by wearing Pinocchio noses and doing a "Lie-In." People with Pinocchio noses are hounding McCain & "Flintstones" Palin all across the country. Come be part of it here in New York City!
http://my.barackobama.com/page/event/search_results?circle_id=74631

Everything you need to participate in this fun, visually powerful, and right-message-for-right-now protest, is available at:
http://www.pinocchiopolitics.org/

Pick up a Pinocchio nose at your local Halloween costume store if you can - organizers will have a few extras.

FRONTRUNNERS is a smart and funny political documentary that follows the student council presidential
campaign at one of the country's most prestigious public high schools: Stuyvesant High School in New
York City.

An entertaining and symbolic campaign film, put forth in classic verite style, we follow four charming and
idiosyncratic candidates as they navigate an electoral process that is said to be one of the most
competitive at the high school level. These teenaged candidates face the same issues as candidates of
any age, such as picking the "right" running mate, shaking as many hands as possible, preparing for
televised debates, impressing the pundits and journalistic community, addressing sensitive race-related
issues, and mobilizing an apathetic voter base.

A microcosm of the U.S. Presidential elections, Caroline Suh's film shows politicking and pluralities
through the lens of the adolescent experience.

Larry Litt, co-star with Eleanor Heartney of The Blame Show, has performed his satiric, critical, ranting characters across America and around the world at festivals, art biennials, colleges, libraries, and galleries. He is pretty damn famous for his successful fundraising art auctions. Political art auction action tonight.

One of the fastest rising stars on the comedy scene today Joe Pontillo brings his everyday rumblings and political satire to the stage. Having been featured in the New York Times and Newsday, Joe is well known for his quick wit and hardcore lunacy. As well as performing at many of the top comedy clubs on the east coast Pontillo is also a regular performer at many colleges and universities throughout the country.

Refreshments are available at all perfromances.

Life After Bush: A Musical We Can Believe In.

Produced and Directed by Noah Diamond and Amanda Sisk.

Obviously, we say this with no objectivity whatsoever, but this is a special show and a special experience. From where we're sitting now, Life After Bush looks like our funniest show, and also our most serious; wrapped up in this comedy is everything we're feeling about this election, this presidency, this country, and its future.

Phonebank Swing State Voters at 7th Ave & 28th Street, every Tues & Thurs
Obama volunteers in NYC thave set up a phonebank to call voters in the crucial swing state of New Mexico.
When: Tuesdays & Thursdays, 6-9pm
Where: PKPR, 307 7th Ave. Suite 1004, at 28th Street.
Bring: Landlines will be available, but if you have a cell phone and/or a wireless-enabled laptop, please bring it.
RSVP: http://www.nyobama.com/events/nyc/#102hatch

Volunteers for Official Obama Phonebank, Manhattan, Weeknights, 5-7pm&7-9pm
The NY office of Obama for America is running a phonebank in Manhattan. Volunteer to call swing state voters and get out the vote to take back the White House. Where: Teamsters Union, 216 W. 14th Street, 6th Floor When: Weeknights, two shifts: 5-7pm & 7-9pm RSVP: (please rsvp to ensure they have enough phones)
http://my.barackobama.com/page/event/detail/officialevent/gshqqj

To find a phonebanking party, go to the Event Finder on the official Obama site:
http://my.barackobama.com/page/event/search_simple
Then click on advanced search, and under “Type of Event” click on “Phonebank.” Enter other relevant data (your location, dates, etc) and it will give you a list of phonebanking events in your area.

Entire weekend trips (incl. hotel) to swing states this weekend and next with group--they also go to a pub together Sat. night!
http://www.dl21c.org/buspp-08.php

and if you want to go to Ohio, where they have early voting http://www.americavotes.org/page/s/traveltoohio08

If you are a law student, attorney, have poll watcher experience or legal training, volunteer for the Obama Voter
Protection Program, Counsel for Change. Sign up at
http://my.barackobama.com/page/s/vpcvol2

Election Protection is working to protect the vote, stopping voter caging and challenges to student registration. They have a free hotline to a legal team that will be active on Nov. 4. Tell everyone you speak with to write down this number now, and call it if they have any problems voting on Election Day.

If this sounds like a Obama-love fest, fear not...but he's clearly not the two-faced scumbag McCain is...he thinks he can obscure TWENTY-SIX YEARS of taxpayer-raping legislation with one bloody non-Fannie Mae/Freddie Mac vote?

McCain...get in the coffin and nail it shut from the inside. 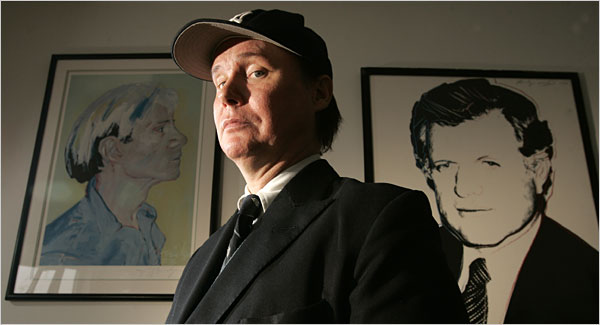