Save Our Land - From Idiots 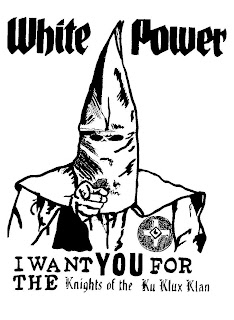 Okay...should anyone seriously consider the flyers left on windshields of vehicles at train stations out in Long Island imploring for people to "Save Our Land - Join The Klan"?

Before I go into my rant...here's a piece I found on WRH's Letters Page...I'd seen it once before, but it didn't seem to be pertinent at the time; however, it now speaks volumes of the desperation of the "Republican" presidential campaign...so without further ado:

READER: What racism does - let's switch it up. What if things were switched around ?.....think about it. Would the country's collective point of view be different? This is what racism does. It covers up, rationalizes and minimizes positive qualities in one candidate and emphasizes negative qualities in another when there is a color difference:

What if the Obamas had paraded five children across the stage, including a three month old infant and an unwed, pregnant teenage daughter?

What if John McCain was a former president of the Harvard Law Review? What if Barack Obama finished fifth from the bottom of his graduating class?

What if McCain had only married once, and Obama was a divorcee?

What if Obama was the candidate who left his first wife after a severe disfiguring car accident?

What if Obama had met his second wife in a bar and had a long affair while he was still married?

What if Michelle Obama was the wife who not only became addicted to pain killers but also acquired them illegally through her charitable organization?

What if Cindy McCain graduated from Harvard?

What if Obama had been a member of the Keating Five? (The Keating Five were five United States Senators accused of corruption in 1989, igniting a major political scandal as part of the larger Savings and Loan crisis of the late 1980s and early 1990s.)

What if McCain was a charismatic, eloquent speaker?

What if Obama couldn't read from a teleprompter?

What if Obama was the one who had military experience that included discipline problems and a record of crashing five planes?

What if Obama was the one who was known to display publicly, on many occasions, a serious anger management problem?

What if Michelle Obama's family had made their money from beer distribution?

What if the Obamas had adopted a white child?

You could easily add to this list. If these questions reflected reality, do you really believe the election numbers would be as close as they are?

Education isn't everything, but this is about the two highest offices in the land as well as our standing in the world. You make the call

So...back to my rant. Here's what a racist truly has to offer to America:

NOT A GODDAMN THING.

Obviously, I am not including whining like a bitch as something to offer - and that's all that a real racist does; bitches and moans about the fact that they are wastes of oxygen.

I could've been a scientist.

I could've been an artist.

I could've been a gigolo (because I care that much, ladies).

I'm not a software guy, and I'm not a hardware guy.

I'm a very happy mix of all of those, and I learn something new EVERY DAY.

There was a slightly selfish aspect to the choosing of my profession, and that was to ensure that I'd never be at the mercy of some tool who, after making sure to extract the $34.95 or so from your helpless, rotting corpse, would repeat these three words like a mantra:

So...first I learned how to navigate computer software. I tell this to everyone who is intimidated by the idea of using a computer for the first time, to think of it as a TOOL.

A computer is simply a tool that has many functions, much as you can do a number of things with a Swiss Army knife, a Leatherman, or a Dremel tool.

I first created flyers and brochures using WordPerfect 5.1...anyone remember that?

Blue screen (no WYSIWYG)...but at the same time, no distractions. I played around with fonts and learned about placement. I put together programs for widely-attended events; I even worked on and corrected proposals for funding, something to which the non-profit agency I worked with benefits from to this day.

Next, I worked on hardware. Have you ever seen an IBM PS computer? I made Windows 95 run on those monstrosities, and I still have the hard drives to prove it.

Next, I worked with Macintoshes - they were a lot of fun.

I don't consider myself to be some kind of genius; however, I am infinitely curious, and that has served me well in life.

I have, therefore, determined that racists are completely INCURIOUS.

For the most part, you idiots can't hold a decent conversation...somehow, it would eventually degenerate into "Damn niggers/wetbacks/kikes/chinks/crackers/spics/etc. all taking jobs from decent Americans"...I'm sure I don't need to bore you.
YOU IDIOTS DON'T WANT TO WORK!

A lot of you idiots who espouse such views are usually two or three spaces behind the people they refer to in their mindless ramblings in the unemployment line.

I want for you to understand what is meant by INCURIOUS. It is meant to mean that anything that falls out of your immediate worldview does not merit a picosecond of thought.

Welfare recipients? Oh, they're terrible scofflaws, I'm sure...but have you ever heard of CORPORATE WELFARE? It is on the order of THOUSANDS OF TIME more pervasive and anything some individual could attempt. So, when I hear the whining of people complaining about all those "people" on the dole, it just gives me cranky-ass.

Here's why that story really rankled me this morning. It's a sad state of affairs when individuals in a country will allow some scumbag, frat-whore, coke addict and failed alcoholic to turn our great country into a shithole, and yet, there are no flyers on windshields advocating for a purge of assholes from our great nation; yet, it seems to be a strong possibility that Dick Cheney's half-Black cousin could be elected, and the biggest effort, aside from blatantly stealing the vote ONCE AGAIN, is to put the fear into the "minorities" with some dopey-ass faux KKK flyer slapped on the windshields of Long Islanders?

If you really suck ass, and you've NOTHING to offer to America besides whining about how you don't really suck ass, but that it's really all the fault of "them brown people", go and sign up, cock-smoker.