Let's start with the good!

First - Happy Mother's Day! I hope everyone is taking some time today to heap love and praise upon their mothers, wives and significant others. Please enjoy the 100th anniversary of this holiday.

Of course, I must tell you of one woman who almost didn't have anything to be thankful for. Her name is Nicole Lilliman, and this story first appeared to me at WRH's main page. Tim Horton's is the largest donut manufacturer in Canada, and that makes what happened to her to be even more pernicious.

She was fired for giving a donut hole to a child.

Did I mistype this? I'm sure by now, you've read the story embedded above...is that the SICKEST THING you've ever heard?

But here's the good part...because this was reported on WRH's page and Yahoo, among other places, the word spread like lightning...and the outrage reached mass proportions...until the head office was made aware of the situation.

They quickly offered their apologies and rehired her, albeit at a location just down the road from the original Tim Horton's.

Hmmm...what's going to happen to that manager, I wonder? That's a lot of bad will that they could have engendered...and I'm fairly sure that arrogant bastard has popped a Timbit in his stupid mouth right in from of the employees, at the same time, threatening, "I'll fire ya if you touch a single Timbit! I'm KING!"

Someone fire THAT IDIOT and give him a Burger King crown...complete with a Timbit stapled to the front.

Some people are still of the mind that Riad Hamad killed himself, when the circumstances of his death dictate to anyone with a functioning brain cell that he was MURDERED! 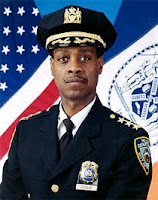 NYPD disciplines white officer who stopped black commander - I gotta say...some tools are working overtime to try and start a race riot, so that martial law can be installed here in the good old U.S. of A.

Guess what, idiots...IT'S NOT WORKING.

Let's end this posting with the boys from We Are Change confronting not only Billary and Chelsea Clinton, but also Rep. Charles Rangel. Kudos to We Are Change for their work...and Nico...oh, you're gonna feel the burn, soon...Ground Zero is what they're gonna call your sphincter.