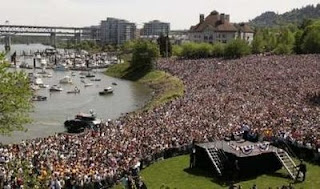 Oh...I think the people have made their will apparent...

From CNN to the New York Times, the media hyped Barack Obama's Portland, Oregon rally on Sunday, some comparing him to a rock star.

Unmentioned in national reporting was the fact that Obama was preceded by a rare, 45-minute free concert by actual rock stars The Decemberists. The Portland-based band has drawn rave reviews from Rolling Stone magazine, which gave their 2005 album Picaresque four and a half stars (out of five), and another four and a half stars for 2007's The Crane Wife.

How many of the people showed up to hear Obama, and how many to hear the band?

Here's how the local paper The Oregonian, which estimated the crowd at 72,000, reported the rally:

"Obama was the biggest star at Sunday's gathering -- though a popular Portland band, The Decemberists, provided the warmup act. With blue skies and temperatures in the 80s, many in the crowd said Waterfront Park was simply the place to be."

CNN headlined its 10 p.m. segment on May 18 with "Barack Obama: Achieving Rock Star Status in Oregon."

The New York Times, which ran a color photo of the crowd, estimated the throng at 75,000, noting that it was "the largest crowd of his campaign so far." There was no mention of The Decemberists, and the Times described the weather as "an unseasonably hot day."

Indie rock Web sites were abuzz with news of the impending concert, which was also announced on the Obama campaign's Web site.

Here's the report from the Indie rock Web site Pitchfork:

And hey, they got to see a pretty sweet opening act too. Calling themselves The Decemberists and led by lovably literate Steve Novick endorser Colin Meloy, this feisty fivepiece charmed the gathered for a good 45 minutes before Senator Obama took the stump. They even closed out with a sing-along entitled "Sons & Daughters", which had the masses joining the band to declare "Here all the bombs fade away..." Something tells me this Decemberists band is going places. Just like Senator Obama.

Here's how Pitchfork primed the pump for the concert/rally:

Indie rock's #1 candidate crush Barack Obama is sittin' quite a bit prettier than he was a few weeks ago when the Arcade Fire and Bruce Springsteen went to bat for him, but the dashing junior Senator hasn't quite clinched the Democratic party nomination yet. Next up on the primary agenda are Oregon and Kentucky, whose voters hit the polls Tuesday, May 20. Should Obama win a heaping majority of the delegates up for grabs that day, he'll be within inches of securing the hotly-contested nom.

And look who's arrived to give Obama the extra push he needs to get on the ballot in November. Why, it's none other than those kings and queens of the month after, the Decemberists!

There's nothing wrong with a candidate using celebrity power to draw a crowd, but the media have a responsibility to report their presence. By ignoring the free concert, the Times and other outlets made it appear that 75,000 people were drawn only by Sen. Obama's considerable charisma.

See? I am honest to a fault...the picture above did not truly represent a huge groundswell of support for Barack Obama, and I strove to set the record straight. For my money, Ron Paul is still my 1st pick.

The irony of George W. Bush going before the Knesset and mocking the late Sen. William Borah for expressing surprise at Adolf Hitler's 1939 invasion of Poland is that Bush's own family played a much bigger role assisting the Nazis.


If Borah, an isolationist Republican from Idaho, sounded naive saying "Lord, if only I could have talked to Hitler, all of this might have been avoided," then what should be said about Bush's grandfather and other members of his family providing banking and industrial assistance to the Nazis as they built their war machine in the 1930s?

The archival evidence is now clear that Prescott Bush, the president's grandfather, was a director and shareholder of companies that profited from and collaborated with key financial backers of Nazi Germany.

That business relationship continued after Hitler invaded Poland in 1939 and even after Germany declared war on the United States following Japan's bombing of Pearl Harbor in December 1941. It stopped only when the U.S. government seized assets of Bush-connected companies in late 1942 under the "Trading with the Enemy Act". Click here for the PDF.

So, perhaps instead of holding up Sen. Borah to ridicule, Bush might have acknowledged in his May 15 speech that his forebears also were blind to the dangers of Hitler.

Bush might have noted that his family's wealth, which fueled his own political rise, was partly derived from Nazi collaboration and possibly from slave labor provided by Auschwitz and other concentration camps...

If the "Trading with the Enemy Act" had been in place now...well, we'd have Donald Rumsfeld in the can, for his dealings with Saddam Hussein; Oliver North and his cronies would be dropping the soap every couple of hours, and our nation would be prosperous, rather than in the ruinous state that we're in currently. 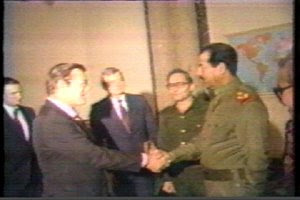 I sent in my best wishes to Senator Ted Kennedy and his family.

When host Whoopi Goldberg raised the issue of George W. Bush's comparing anyone who wants to talk to Iran or Syria with the appeasers of Nazi Germany on Monday's edition of ABC's The View, the panel erupted into furious debate

She insisted, "It's not always about him," and suggested Obama is being defensive because he knows his support for talks with Iran is a weak spot

"I think the president was very clear in what he meant," Goldberg replied tartly

"The Bush administration is out there talking to North Korea, talking to Syria," noted liberal Joy Behar. "Isn't that what diplomacy is about? This guy doesn't know the difference between the word 'diplomacy' and 'appeasement.

"One more point," continued Behar, pulling out a prepared statement. "It's very interesting and ironic that George Bush, Senior's -- er, George Bush, this one -- his grandfather -- this one -- the late -- I don't like to speak ill of the dead, but in this case it's fun -- he was a United States senator, Prescott Bush.

"This is his grandfather," Behar continued.

"He has no business talking to Jewish people when he's got this right in his backyard"
"How come you can bring up this backyard but then it's not alright to dig into Obama's backyard and family history?" was all the flustered Hasselbeck could find to say.

Your speech on the Knesset floor today was not only a disgrace; it was nothing short of treachery. Worse still, your exploitation of the Holocaust in a country carved out of the wounds of that very crime, in order to strike a low blow at American citizens whose politics differs from your own is unforgivable and unpardonable. ...

Well, Mr. Bush, the only thing this comment lacked was a mirror and some historical facts. You want to discuss the crimes of Nazis against my family and millions of other families in Europe during World War II? Let me revive a favorite phrase of yours: Bring It On!

Your family's fortune is built on the bones of the very people butchered by the Nazis, my family and the families of those in the Knesset who applauded you today. ...

Your family did not stop with supporting fascists and Nazis abroad, did they, Mr. Bush? Surely you must know of your grandfather's role in the treasonous plot of 1933 to overthrow democracy in America? Let me remind you Grandpa Bush - that is to say, your grandfather - wanted fascism imported into the United States, or as you now call this type of transformation, "exporting democracy."

"Prescott went so far as to subsidize a coup attempt in order to achieve his dream of a fascist America."

There goes Whoopi's gig!
Posted by hANOVER fIST at 5:40 AM