Stars of David in a Nazi Dungeon? Could it be...

Check out this page: The Planned Destruction of America 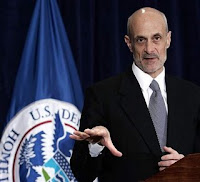 At a speech before the Heritage Foundation this week, Homeland Security Secretary Michael Chertoff said the U.S. needs to have a “nonpoliticized, serious discussion” while writing new laws to define the best way to combat terrorism.

Chertoff said that once laws are written, the public should not second-guess government actions and claim that federal officials are overstepping their authority. He decried critics who make such accusations, despite the widespread pubic calls after the September 11, 2001 attacks for the U.S. government to do more to protect the country. Chertoff further said U.S. society needs to come to a determination as to what are acceptable authorities for the U.S. government versus what violates people’s rights.

Chertoff called U.S. laws “woefully inadequate” in the context of current technology. He said the most significant step American society needs to take is adapting laws to the 21st Century challenge of fighting terrorism. Changes in technology have created unique challenges for the government when it comes to intercepting communications, as well as collecting and analyzing information found in the public domain according to Chertoff.

Okay..time to trot this out (hope the legs don't break on this filly!)...

Those who would give up essential liberty to purchase a little temporary safety deserve neither liberty nor safety.
Benjamin Franklin, Historical Review of Pennsylvania, 1759
US author, diplomat, inventor, physicist, politician, & printer (1706 - 1790)
Posted by hANOVER fIST at 3:02 PM