THE Washington media are about to be consumed by a new debate: how much attention they should give scandalous claims about Barack Obama when the man making them appears at the National Press Club today.

Larry Sinclair, from Minnesota, became famous - or infamous - when he posted a YouTube video last year alleging he and Senator Obama used cocaine together and participated in homosexual acts in 1999.

According to Mr Sinclair, the liaison occurred in the back of a limo while the presumptive Democratic nominee was in the Illinois Senate, but beyond that, Mr Sinclair has been vague about dates and locations.

There is no proof of the allegations and when Mr Sinclair offered to take a polygraph test last year, he failed it. It's also instructive that none of Senator Obama's opponents has embraced his claims.

But now Mr Sinclair has booked a conference room at the National Press Club, the premier venue for press conferences in Washington, and he plans to air the allegations again.

The mainstream media are unsure about how to treat his claims and the move to host him at the National Press Club has outraged liberal websites, which have moved well beyond reportage to activism. Firedoglake.com, edited by Jane Hamsher, has assembled an online petition signed by nearly 11,500 people and has delivered it to the club, urging it to check the facts of Mr Sinclair's story before giving him the stage.

- Former vice-president Al Gore offered a vigorous endorsement of Senator Obama on Monday and urged Democrats to keep in mind the consequences of not taking the general election with grave seriousness.

The two strode onto the stage arm in arm to thundering applause from a crowd of nearly 20,000 people in Detroit. As Mr Gore ticked through a long list of challenges facing the nation, he hailed Obama as "clearly the candidate best able to solve these problems and bring change to America".

with The New York Times

First of all...who CARES what Albert "Global Warming will make me RICH!" Gore says about ANYTHING? He not even a good environmentalist! The Monkey King has a greener house than Gore! Speaks to his real motives, you might say...

As to Larry Sinclair's claims...SO GODDAMN WHAT?!?

"Whoa...wait a minute...you mean that you don't care about a Presidential candidate doing DRUGS?!?"

Apparently, it didn't make any bloody difference when GEORGE WALKER BUSH was accused of doing COCAINE...at least, not to the lapdog press.

Jim Hatfield wrote a book called Fortunate Son, detailing the many indiscretions and illicit activities of the Monkey King. Taken from Wikipedia: "When the media stumbled upon a story regarding George W. Bush's 1972 cocaine possession arrest, Rove had to find a way to kill the story. He did so by destroying the messenger." 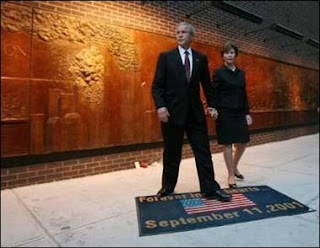 This was to become my subject for a book on George Walker Bush's admitting to foreknowledge of the events of September 11th, 2001. It was to be called Body Language: George Walker Bush Reveals Complicity in 9/11 or something like that...I'm sure by now that someone has beaten me to it, but at any rate...HE'S STANDING ON THE BLOODY DEDICATION RUG?!?

Where did this idiot grow up? In a toilet?!?