What's All The Whining About? 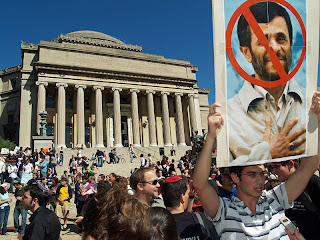 This is all a lot of hullabaloo about NOTHING.

Actually, that's not quite true...it is about stifling a voice - that voice belongs to the President of Iran, Mahmoud Ahmadinejad - considering the shoddy treatment that he's received at the hands of our Distraction Media, he is owed an opportunity to clear the air.

For example, he never said these words: "Israel must be wiped off the map"; in fact, he has stated that his disagreements are with the policies of Israel, and not with Israelis. That is a very important distinction to make.

There is a lot of rhetoric rebounding within the halls of power: as it currently stands, we have Iran on one hand, being threatened with either invasion or annihilation, being backed by both Russia and China; on the other hand, we have Israel, who maintains that Iran is a threat to their existence, backed by us, the good ol' United States of America.