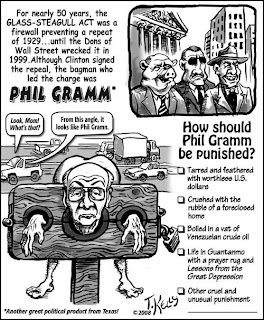 Here is what I believe the dopey-ass plan is to be:

Ann accord has been made in Congress in regards to the $700 million, so now the threat is that if WE THE PEOPLE do not accept this raping of our pocketbooks so that his cronies don't have to go an hour with sparkling water, he will invoke martial law, having "passed into law" provisions created out of whole cloth by Alberto Gonzales and Michael Mukasey.

Here's the thing: Congress cannot pass any laws that are UNCONSTITUTIONAL, so the nonsense provisions that the Monkey King has attempted to established should be thrown out. For that matter, the entirety of our elected officials (with the exception of Ron Paul, Karen Johnson, Bill Richardson, Dennis Kucinich and Cynthia McKinney) should be voted out of office...it is clear that they do NOT have the interests of WE THE PEOPLE at heart.

George Walker "The Monkey King" Bush may wish to leave office with a shining legacy...but he should have thought of that before he assisted in turning our country into a third-world nation.

Special thanks to Travis Kelly for the timely and appropriate illustration - we just need 529 more of these stocks set up about the perimeter of Washington, D.C. - bring your best rotted GM foods, and have at 'em!

Understand...if you give in and allow these tools to get back to their reindeer games...this will be your fate:


Here's a link to the first draft of the Wall Street Rapefest.
Posted by hANOVER fIST at 1:34 PM