More Fun with the Titles Of Nobility Amendment!

Let's begin with the conclusion offered by J.A. Silversmith:

CONCLUSION
The Titles of Nobility Amendment does not have an illustrious history. The reasons for its proposal are obscure; what we know of them suggests partisan politics or xenophobia, neither an admirable nor worthy motive for amending the Constitution. The amendment's history is likewise obscure; scholars have almost universally failed to portray it accurately, amplifying the confusion about the amendment. Today, it is virtually forgotten, meriting at most a few lines in even the most detailed tomes on the Constitution.

If the amendment had remained a footnote to history, its obscurity might not be of great significance. But even before the 1990s, the amendment carried two important messages: that concern about divisions in society in the United States is a historic problem, and that the legal community, both in the nineteenth and the twentieth centuries, has not invested sufficient effort into accurately communicating the law to the profession, as well as to the public. Further, these messages now have manifested themselves in a new, disturbing guise: that of extremists who have taken advantage of the amendment's obscure history to mislead the public as to its validity and purpose, driven by their anti-lawyer agenda and alienation.(203)

These misrepresentations should be taken seriously and countered, both for the good of the profession and of the public. Too often, legal scholarship has been and continues to be guilty of "scholarly defects of the most elementary kind."(204) Law cannot have--and does not deserve--the public trust if the law is itself untrustworthy.(205) But past failures should not lead lawyers to withdraw from the field and leave it to extremists. One should remember that the oft-misquoted line from Shakespeare, "[t]he first thing we do, let's kill all the lawyers,"(206) actually speaks to the vital role that lawyers historically have played in society; only if all of the King's learned advisors were vanquished would rebels be able to install a tyrant.(207) If there is any nobility in being a lawyer, it is because of the role and responsibility of protecting society from those who seek to create and exploit divisions within it.

He begins his "conclusion with: "The reasons for its proposal are obscure; what we know of them suggests partisan politics or xenophobia, neither an admirable nor worthy motive for amending the Constitution."

Maybe he failed basic reading comprehension...but it seems clear to me why the amendment was proposed...to forestall any clandestine attempts to take over the government away from the watch of WE THE PEOPLE...which is EXACTLY WHAT OCCURRED. He is really being disingenuous with us here.

Then, there follows this amazing statement: "One should remember that the oft-misquoted line from Shakespeare, "[t]he first thing we do, let's kill all the lawyers,"(206) actually speaks to the vital role that lawyers historically have played in society; only if all of the King's learned advisors were vanquished would rebels be able to install a tyrant."

What was he thinking? This fellow is obviously not a student of history...rebels installing TYRANTS?!? Oh...they must be many cases of that occurring, like...er...um...NEVER. The monied interests install tyrants to ensure that there are no uprisings - J.A. Silversmith deals in CONJECTURE, not FACT, to prove his flawed hypotheses. It's readily apparent to anyone who isn't either a lawyer or a monied interest who gamed the system to achieve said funds, that America is suffering under the non-application of the Titles of Nobility Amendment. Our forefathers only failed us in regards to not adding an immediate penalty to Article I, Section IX...but it probably didn't occur to them that any REAL AMERICAN would take advantage of the non-punitive nature of the amendment, as it was first realized, so soon after the United States first declared their independence from the British colonies and the King.

Let's reiterate the actual proposed amendment, and the reason for its existence: 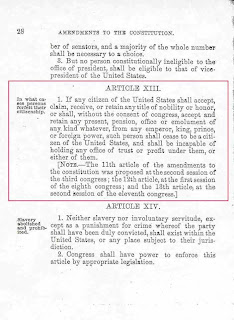 "If any citizen of the United States shall accept, claim, receive, or retain any title of nobility or honour, or shall without the consent of Congress, accept and retain any present, pension, office, or emolument of any kind whatever, from any emperor, king, prince, or foreign power, such person shall cease to be a citizen of the United States, and shall be incapable of holding any office of trust or profit under them, or either of them."

In the margin, you will note text that states: "In what cases persons forfeit their citizenship".

Sounds pretty bloody clear to me.

In fact...here's a clear example of why you don't let the fox attend to the henhouse...


Update: It seems that the 14th Amendment is part of this chicanery foisted upon our nation - read more here:

CDR Note: In view of the evidence available, the fact of the invalidity of the 14th Amendment is blatant and irrefutable. In view of the fact that — never mind the obvious corruption in the courts at the time the invalid amendment was challenged — the courts today appear to operate under the invalid 14th Amendment, it would hardly be presumable that a court challenge, regardless the aroused public sentiment, would be successful. However, this is not a matter for courts to decide. It is a matter for the people to take into hand; to instruct the legislatures of their respective states to declare its (14th Amendment) invalidity, while also declaring the unalienable rights of all legal residents in the State, regardless race, color or creed.