About this BBC “hit piece” story about WTC 7… THERE IS A HUGE CONTRADICTION HERE! 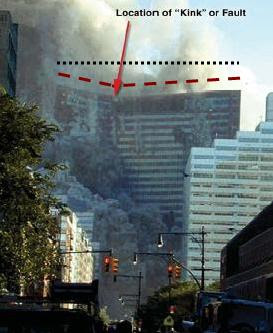 The BBC does it again!

You see...here's the main problem with the mutually-exclusive excuses for going along with the "official" interpretation of events...

As indicated in a prior posting on PrisonPlanet, Larry "Two Sheds" Silverstein cannot have it both ways - when he uses the term "pull it", he attempts to explain that he was not using the widely-recognized controlled demolition term as it is commonly used; rather, he states that he was referring to the removal of firefighters from the Salomon Brothers Building, also known as World Trade Center Building 7.

But that turns out to be a bold-faced LIE. There were NO FIREFIGHTERS in WTC 7! There seemed to be an issue with getting proper irrigation with which to douse the relatively localized fires with WTC 7; and so, firefighters were forbidden to perform actions within the building.

The BBC hit piece that attempts to debunk the assertions that the Salomon Brothers Buiding was removed by controlled demolition engaged in some selective editing of the statement made by Larry in a 2002 documentary - the original statement is thus:

"I remember getting a call from the, er, fire department commander, telling me that they were not sure they were gonna be able to contain the fire, and I said, "We've had such terrible loss of life, maybe the smartest thing to do is pull it." And they made that decision to pull and we watched the building collapse."

Do you see the last line of his statement? It was REMOVED in the piece. That alters the entire context of his statement, allowing the BBC hit piece to falsely assert that Larry did not refer to the collapse of WTC 7 using widely-accepted controlled demolition terminology.

Here's a great page in regards to controlled demolition as it pertains to WTC 7!


I have reprinted my posting at PrisonPlanet in regards to this latest bit of crap by the BBC - of course, it is partly in response to some stupid-ass posters:

I think that Brad is Brad Davis of the despicable smear attempt on Alex Jones - the same one he pulled on Michael Jackson.

Lokis...you were the result of someone not pulling out quite in time...I'm sure that you parents look askance at you every once in awhile...knowing that you weren't a planned birth.

Why am I so incensed? Because it's pieces of afterbirth like YOU that allow for atrocities and false-flag attacks like September 11th to occur.

According to your shared delusion, we are less than human and don't need to be afforded human rights. We can be lied to with impunity. In fact, we have NO RIGHTS that you need to observe or respect.

Do you understand why we REJECT your bullshit lies and prevarications?

I was, until yesterday, engaged in a battle with a completely morally-compromised individual - we kept going back and forth about NONSENSE...he ended up admitting thatthe attack on the U.S.S. Liberty was an attempt to hide/obscure ILLEGAL ACTIONS taken by the Israeli Air Force, that if successfull, would have laid the blame squarely on Egypt. Luckily, our AMERICAN-BUILT intelligence ship was tougher than their shitty little air force.

Here's the thing...I was listening to that very show last night on my walkman - Alex was discussing how he BUSTED Brad Davis on his ensuing hit piece against 9/11 Truthers, and the tactics understaken to do so. The ONE THING that these tools NEVER do is ADDRESS THE FACTS.

The Drug War...let me guess...you love those bloody pharmaceuticals, don't you? You are nothing but a REAL useless eater...you will suck on any diseased teat that is offered to you, and you will toe the line like a good little useless eater, won't you?

Do you know that there are only three reasons marijuana is made illegal here in the U.S.?

1. Marijuana can cure most ills, including CANCER.

Otherwise, Monsanto and all of those other purveyors of FrankenFoods would be at the forefront making RoundUp-Ready weed and they would ELIMINATE EVERY OTHER MARIJUANA CROP AROUND THE WORLD.

So...Brad, lokis, and any others...you can take your shared delusions of grandeur, your lies to start a war, and you can shove them up your diseased tuchises.

WE THE PEOPLE will not stand for any more!
Posted by hANOVER fIST at 1:38 PM

You don't dissemble very well, Hanover. You can't even get your facts right.

There WERE firefighters in WTC up to several hours before the collapsed BEFORE they were pulled from the site.

You are so dumb not to recognize that Silverstein's comments were made months later in the taping of the PBS interview with Silverstein recalling the events of 9/11.

Now, just how stupid can you 9/11 Truthers get, Hanover?

And, of course, you cannot explain how the PBS interviewer did not react in shock to Silverstein statement, nor why PBS didn't realease a new bulletin exclaiming "SILVERSTEIN SAYS HE ORDERED WTC7 TO BE BLOWN UP."

No, you can't explain that because you KNOW, as we all do, that everyone knows the context of Silverstein's statement.

Now, Hanover, would you like some help removing that Jackboot from your mouth?

How dumb can you idiots get, anyway? BBC handed you a good spanking, just like your sidekick, Damian.

I will address your STUPID points right here and now...

In regards to my "dissembling"...give me a concrete example of doing so, or shut your pie-hole.

Did I not reference the date of the documentary as being in 2002? How do I NOT RECOGNIZE that fact, then? What a jackass you are.

Everyone DOES KNOW the context of "Two Sheds'" statement; they just can't believe that he let the cat out of the bag!

My "jackboot", as you so anti-Semitically put it, is lodged firmly in your JACK-ASS.

The BBC handed us all 9/11 Truthers a reason to continue seeking the truth.

You , your ilk and your shared delusions of grandeur are no longer welcome in the UNITED STATES OF AMERICA.

So, precious, do you now deny you wrote the post to which I commented?

Perhaps you forgot what you wrote. Let's try to pay attention, Hanover, as hard as it is for you 9/11 Deniers to do so.

"But that turns out to be a bold-faced LIE. There were NO FIREFIGHTERS in WTC 7!"

Do you remember now?

Because there WERE firefighters in WTC 7. There were plenty of them SEARCHING for others BEFORE they were "pulled" out.

God, WHY are you 9/11 Deniers so pathetically stupid that you fall for everything your 9/11 Denier websites tell you. Talk about brainwashed robots!

Grow up and try to learn how to THINK RATIONALLY, Hanover, as much as you hate the concept. We're tired of 9/11 Denier idiots repeating lies year after year after year.

Yes...I DO remember saying just that...and at the time I was WRITING IT< I didn't imagine that I'd HAVE TO STATE THE EXACT TIME FRAME MEANT.

Are you an IDIOT? I mean, really, really stupid?

Do you know how many firefighters DIED in the events of September 11th?

Three hundred and forty-three good men and women died. It's not a number to me; there are thousands affected by the loss of these fine individuals.

Now...at the time of the "collapse of the Salomon Brothers Building, THERE WEREN'T ANY BLOODY FIREFIGHTERS IN WTC&!

Don't try and play that stupid game of semantics with me...better losers than YOU have tried.

Here's the point you SHOULD be addressing...if you had the moral courage to speak to the TRUTH:

Under our current knowledge of physics, the disappearance of the Salomon Brothers Building cannot be explained without considering a CONTROLLED DEMOLITION hypothesis.

IT CANNOT BE CONSIDERED WITHOUT POSITING THAT WTC 7 WAS BROUGHT DOWN BY CONTROLLED DEMOLITION.

If you're honest with yourself, you'll admit that Larry "Two Sheds" Silverstein is NOT being forthright in his statements...but I expect the puckey to be piled higher than a Katz's pastrami on rye.

Now you've got me hungry...

This is deadly serious stuff.

The fate of the United States of America is at stake, and I'm not playing with you morons.

I have never seen a 9/11 Truther who had such little comprehension of the English language, the facts of 9/11, what Larry Silverstein said and when.

It is simply incredible how confused and twisted your mind is, Hanover.

How is it possible for you to be so utterly stupid, Hanover? I think it is high time you get psychological help and then, when you're better, GO TO SCHOOL.

No wonder Mackey is right:

E-mail me a good photo of yourself that I can use om my site.

Exactly WHAT IS IT that I can't seem to comprehend, putz?

As far as your picture request goes, why don't you go cruise the bathhouses in Washington, D.C? There, you should be able to score a pic of Karl "Miss Piggy" Rove in flagrante indelicato with some roguish bear - that's the pic you can use...obviously, you get to be Karl; I'll be the bear cleaning your pipes.

You got a purty mouth...you're gonna pray for me, bwah, and yer gonna pray good!

Oh...and you're welcome in advance for swallowing that load of choda.