I have a question for the Internal Revenue Service... 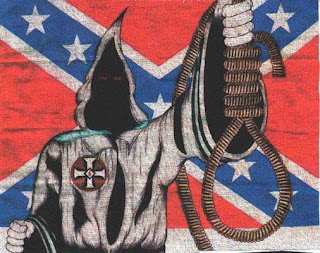 "Are you willing to reinstate the tax debt of Halliburton to assist with the economy of the United States of America?"

I received a garnishment order from the Internal Revenue Service the other day.

Now...I am a man of principle. It's a matter of a couple of thousand dollars; not really something that will break me in any regard...but after seeing HALLIBURTON forgiven for their tax burden of $500 MILLION DOLLARS...The Federal Reserve and the Internal Revenue Service can go KISS MY ASS.

Did I not state that loud enough for you cock-smokers to hear?

KISS MY ASS - I will fight you tooth and nail...and you know why?

The POWER OF RIGHT is on my side.

WE THE PEOPLE were betrayed in 1913; once, when the Federal Reserve was brought in - we had two usurious banks that were kicked out by WE THE PEOPLE, and this will be a third, once the bottom line of ALL AMERICANS becomes apparent; second, corporations were given the rights of a "person", an inequitable proposition if you put you mind to it.

The tax burdens of the corporations was passed on to WE THE PEOPLE.

THAT is the big secret.

Taxes, by LAW, are applied to INCOME. Income means monies obtained through PROFIT, such as stock earnings, lottery winnings, etc. WAGES are what you and I, the middle and upper class, EARN through an equal exchange of our blood, sweat, tears and TIME.

This is why your health insurance was once the province of your employer. If you were working for yourself, you'd have to obtain your own health insurance...but while you're employed by someone else, your welfare is their concern. This is why many of the transit workers in the TWU feel as though some of their brothers betrayed them all for thirty pieces of silver - they received a thousand dollars back for their agreeing to cover their own health care costs at 1.5%.

Guess what the next contract will stipulate? 2%? 3%?

Assholes! You never get those worms back into that can.

If I recall correctly...they added that thousand to YOUR REGULAR PAYCHECK, and you were TAXED ON IT!!!

You put your lives in danger every bloody day, breathing in the fumes in the subway tunnels; manuevering the multi-ton machinery at the yards, driving the buses while braving traffic, rude customers and the occasional retard who thinks it's cool to assault drivers while vehicles are in motion...YOU are the guys who should have free passes, not the bloody fat cats who find a new way every day to cheap out on your WAGES.

But I'm going to attempt to appeal to their better natures...and when that fails, well, I'm going to bleed their bottom line.

Our laws should not be unfathomable to all but lawyers; would you all not agree, dear readers? Why is it that one requires lawyers to decipher what should be something as simple as a tax code?

My taxes were done by a third party. What they had done was so confusing to me, that I declined to use their services again. I did my own taxes, as I had done before, and the lovely IRS decided to abscond with my taxes that year, and the next.

You're not getting another bloody penny from me - and if you persist in this "garnishment"...I WILL DESTROY YOU.

You have been duly warned.

John Conyers is a piece of human garbage - he SINGLEHANDEDLY derailed the impeachment hearings that were to occur last Friday.

I would submit that it was a mistake to hold them on Friday...NO ONE CARES AT THAT POINT...the weekend's coming up! Time to go to the beach! It's getaway time! Who cares about some dopey-ass impeachment...he didn't get a hummer from a zoftig intern did he?

John Conyers...ever since you admitted in Fahrenheit 9/11, that you and your many colleagues DO NOT EVEN READ MANY OF THE BILLS YOU PASS, AND WORSE, ADD YOUR PORK PROJECTS AT THE LAST MINUTE...any words I have fail to describe you and your ilk.

You should RESIGN, and forego your retirement nest-egg...after all...YOU DIDN'T EARN IT, DID YOU?
Posted by hANOVER fIST at 6:01 PM

Just a reminder, bunky. They won't let you blog from jail.

Have you experience being someone's prison bitch, B.J.?

Maybe that's how you got your name.

Just in case your Dr. Seuss books don't tell you this:

Neither the Internal Revenue Service, nor the Federal Reserve, are GOVERNMENT AGENCIES.

And let me guess...you disagree with the FACTS, stupid?