Now...what can you say about this?

The boy "deserved it" for NOT COMPLYING?!?

If the boy dies...will they state that cause of death was due to...NON-COMPLIANCE?

Here's Dennis Kucinich's Articles of Impeachment listing; here is a summary of crimes against WE THE PEOPLE.

Have you had enough yet?

Have you yet realized that the oil companies are gaming the system to reap unforetold profits?

Do you know that when heretofore "unknown" oil fields are revealed, that oil prices will "re-stabilize" to around $50 a barrel?

Don't you realize that the auto manufacturers were aware of this? Did you really think that they would take a loss, just to sell off a new car, to pay for your gas?

Yeah...just sit back and watch another season of American Idol..."just move on...nothing to see here..."

Argh...let me find something else... 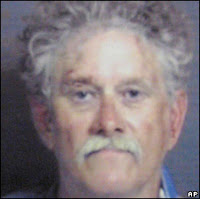 A man accused of shooting dead two people in a Tennessee church was motivated by hatred of liberals and anger at being jobless, US police say.

Knoxville Police Chief Sterling Owen said they had found a letter in Jim Adkisson's car in which he described his feelings.

There were about 200 people in the church, which is known for its liberal stance, at the time of Sunday's attack.

Mr. Adkisson, 58, has been charged with first-degree murder.

Children were putting on a play at the Tennessee Valley Unitarian Universalist Church when a gunman entered with a 12-gauge shotgun and opened fire on the congregation.

People dived for cover under pews but several adults were hit, two of them fatally, before a group managed to overpower Mr Adkisson.

Police Chief Owen said Mr. Adkisson had brought the gun into the church in a guitar case.

Officers also found a four-page letter in the suspect's car.

"It appears that what brought him to this horrible event was his lack of being able to obtain a job, his frustration over that, and his stated hatred for the liberal movement," Chief Owen said.

"It appears that the church had received some publicity in the recent past regarding its liberal stance on things and that is at least one of the issues we believe caused that church to be selected."

The Tennessee Valley Unitarian Universalist Church describes itself on its website as working for social change since the 1950s, including desegregation, racial harmony, fair wages, women's rights and gay rights.

The two people who were killed were Greg McKendry, a 60-year-old usher at the church, and Linda Kreager, who died of her injuries at a nearby hospital a few hours after the shooting.

Church member Barbara Kemper said that Mr. McKendry had "stood in front of the gunman and took the blast to protect the rest of us".

Hatred of liberals...well, that's a GREAT REASON to shoot people, eh? What a TOOL. I hate dumb, brainless nitwits, but you don't see me mowing down schmendricks like chaff, do you?

All he did was to prove what a useless human being he was...TAKE SOME RESPONSIBILITY, idiot.

I got a job for you...why don't you SECURE OUR BORDER? That way, you can ensure that other Americans' jobs aren't lost...except, you obviously don't give a tinker's damn about anyone else, do you?
Posted by hANOVER fIST at 1:28 PM