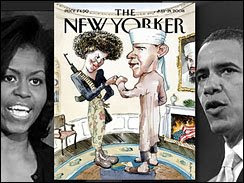 (The Politico) This story was written by Mike Allen.

An American flag burns in their fireplace.

The New Yorker says it's satire. It certainly will be candy for cable news.

The Obama campaign quickly condemned the rendering. Spokesman Bill Burton said in a statement: “The New Yorker may think, as one of their staff explained to us, that their cover is a satirical lampoon of the caricature Sen. Obama's right-wing critics have tried to create. But most readers will see it as tasteless and offensive. And we agree."

The issue, which goes on sale Monday, includes a long piece by Ryan Lizza about Obama’s start in Chicago politics.

At a press availability Sunday afternoon in San Diego, Obama was asked, according to a transcript by Maria Gavrilovic of CBS News: “The upcoming issue of The New Yorker, the July 21 issue, has a picture of you, depicting you and your wife on the cover.

“Have you seen it? If not, I can show it to you on my computer. It shows your wife Michelle with an Afro and an AK-47 and the two of you doing the fist bump with you in a sort of turban-type thing on top. I wondered if you’ve seen it or if you want to see it or if you have a response to it?”

Obama, shrugging incredulously, replied: “I have no response to that.”

The magazine explains at the start of its news release previewing the issue: “On the cover of the July 21, 2008, issue of The New Yorker, in ‘The Politics of Fear,’ artist Barry Blitt satirizes the use of scare tactics and misinformation in the presidential election to derail Barack Obama’s campaign.”

Howard Kurtz of The Washington Post said Sunday on his CNN media show “Reliable Sources” that the cover is arguably “incendiary.”

“I talked to the editor of The New Yorker, David Remnick, who tells me this is a satire, that they are making fun of all the rumors,” Kurtz added.

Clarence Page of the Chicago Tribune defended it as “quite within the normal realms of journalism,” adding that “it's just lampooning all the crazy ignorance out there.”

The panelists agreed it would succeed in its goal of getting attention.

So...here's just one of the comments out of the 87 (so far) posted on their page...my comments to follow:

"HOLY COW!! i have never seen ANY media outlet put out that kind of insult to a presidential candidate before! The New Yorker should be run out of town after that. They should be called the New Middle of the North Atlantic or something."

"If they were fair in being evil and rotten, they''d do a picture of John McCain and his wife bent over a rail with wads of Corporate money, Oil and military contracts shoved up their wazooos while spitting on poor average americans of all races."

Alrighty then...I'd instead would like to see John McCain buggering Uncle Sam while burning our flag, while the Viet Cong looks on in the background of their POW camp, with haggard REAL U.S. POWs in tow. In fact...give me a bit of time...let's see if I can make that happen...while I try to work some magic, here's some BS campaign commercial by "Songbird"...I guess this was before he could do an Al Jolson for the Viet Cong.

Oh...by the way...Senator Obama's office in Detroit was burglarized.